Here we have M95 and M96 in Leo. I find these two galaxies make a striking pair. Together they are two of the three Messier objects within the Leo I group. The other is the elliptical M105 which is located with another sub-group about 50' North of M96 out of the frame.

M96 on the left, lies approximately 31 million ly away and has a diameter of about 100,000 ly which is similar to the size of our Milky Way. It is a beautiful spiral galay with some perturbations likely caused by the gravitational forces from other nearby galaxies.

M95 on the right lies approximately 32 million ly away and has a diameter of about 46,000 ly. I find it to be a lovely example of a barred spiral.

I have found several instances on various websites of these estimated sizes that agree, more or less, with these diameters. However when one simply looks at the image, it appears that these galaxies, both being about 32mm ly away, are similar in size... Perhaps there is a lot I was unable to capture that would show a more discernible difference.

We have been having some really poor weather here in Arizona and in the rare instances of clear(er) skies, the seeing has been poor. This situation has also resulted in the inablity to get as much integration time as I would have liked. Perhaps for that reason, I had quite a bit of difficulty doing the color calibration of this image. Or perhaps not enough integration? Not quite sure... 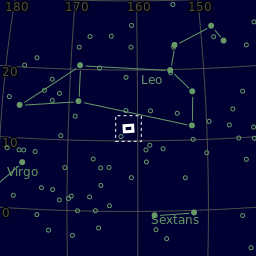