This object is a planetary nebula located 13,000 light years away in the constellation of Cassiopeia at a declination of +58 degrees. This PN spans 0.5 arc-minutes in our apparent view, which corresponds to a diameter of 2 light years.

Not much has been written about this object. The central star is barely visible. The nebula structure is similar to a smaller version of M97 (Owl Nebula) – round, primarily oxygen, and two dark circular voids in the inner region which are likely caused by bi-polar jets from the central star. Several PN appear like this, is a class that I refer to as the Owl Texture. Typically with this texture, one void is slight darker than the other, the darker void being pointed more towards our line of sight. 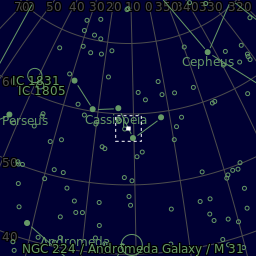