This is my first light image with a new QHY183M CMOS. This is also my first-ever acquired data and processed image with a CMOS. All my previous experience has been with CCD cameras. I wished to explore how well I could use a small-pixel CMOS camera such as this with a mid-range refractor to achieve resolution on par with what I image with my larger CCDs on longer focal length scopes. For this image, I paired the QHY183M with my TS 130/910 refractor. With 2.4 μm pixel size, the resolution is 0.545 "/px.

NGC 6946 was a familiar target well positioned for this first light. I have written about this spiral galaxy before (although unfortunately I have not had time yet to repair my previous image from several years ago). With new equipment, I often wish to image targets familiar to me so that I can compare experiences.

I'll replicate a few of my previous notes here. This is a LRGBHa image of NGC 6946, the Fireworks Galaxy. It was given this name due to the unusual number of supernovae observed in this galaxy over many years. The galaxy is approximately 22 Mly distant, located on the border between Cepheus and Cygnus, with apparent magnitude 9.6 and apparent size 11.5 x 9.5 arcmin.

Coming from a CCD background, CMOS presented several differences and challenges with which I am still becoming family. Here are a few "field notes" that may be of interest or perhaps use to others undergoing this same transition:

• With this camera I also ordered the QHYCFW3-S, QHYOAG-S and QHY5III178M guide camera. This guider has matching pixel size of 2.4 μm. Once I upgraded to the latest ASCOM drivers, everything worked with SGP, although this was not the case with previous drivers.

• I used my existing 31 mm unmounted Astrodon filters with the new OAG. I did not use the felt washers that came with the filter wheel but rather used delrin washers to secure the filters in place. Unfortunately, I raided these filters from my QSI683. If I have need in the future to use both cameras at the same time, I'll need to buy new filters, but that's not likely to be necessary.

• The first thing I did when I received the CMOS camera was to examine bias and dark frames. This was my first introduction to the presence of CMOS pattern noise, particularly randomly placed horizontal line noise. My CCDs typically show mostly gaussian noise with some cases of measurable and controllable fixed pattern noise. I was ready to return the camera thinking there was some electronic noise issue, but an experienced user informed me that this was a common CMOS attribute and that I just needed to process through an image, making sure to dither.

• When examining a series of dark frames of increasing exposure, I was surprised to discover that the average signal level actually drops from 0s exposure to about 0.5s, and then the signal increases from 0.5s and higher. It was my intention to produce a photon transfer curve (PTC) starting with dark frames, and this proved to be problematic right out of the gate due to this issue.

• As a consequence of the previous issue, I was not able to accurately measure the gain of the camera using a gain parameter value of 16. According to the QHY literature, this is supposed to be about 0.5 e-/ADU, however I think in my case it may be even less, perhaps 0.3 e-/ADU, but this is something that I'll need to determine more accurately at a later time.

• Having chosen NGC 6946 as my first target, I knew that I needed to concentrate first on LRGB imaging. I practiced taking flats prior to my imaging session and was pleased to see that my flat panel worked fine with this camera. Given this offset issue with exposures shorter than 0.5 s, I targeted panel intensity levels for 1 s exposures and determined to only use flat darks of matching 1 s frames.

• Using SGP, I discovered that the sensor cooling operation can at times be buggy. The cooling will overshoot my target temperature and then not back off to settle on my desired setting. I have learned to fix this by letting the camera warm up all the way, disconnect, then connect again and then cool again. Usually the target temperature is then reached quickly and accurately. This most certainly appears to be a driver issue.

• In addition to LRGB I had time to take some Ha frames as well. In this case I wished to adjust the gain setting to settle on what according to the literature is 1 e-/ADU, however at some point the driver reset itself, and I actually ended up reverting to the gain setting of 16. My collected darks and flats were at higher gain, and as a result I could not calibrate out the famous amp glow from my Ha data. This had me upset until I looked into the FITS header and discovered the gain setting had switched in SGP on its own. The lesson learned here is to always check the offset and gain settings before acquisition!

• With gains of darks, flats and lights all matching, I had no issues calibrating my frames. In fact, this went very smoothly, and I was impressed with how easy it was. I was expecting this to be difficult based on the experiences I've heard from others, but thankfully I've developed a regimental process with my CCD imaging in the past that served me well here. I do not rely on any form of dark scaling or optimization whatsoever. I take flats and matching dark flats. I take lights and matching dark frames. The matching is with sensor cooling, and with this camera also with offset and gain.

• My last field note concerns full well capacity. Here is where I see the biggest disadvantage of this particular camera. With its small bit range and small well capacity, I was disappointed to have saturated so many stars despite using a relatively low gain and short exposure of 30s. Here is an area that I will need to practice more carefully as I work on LRGB imaging. I had no issue with the NB Ha channel and 600s exposures, but recall that I inadvertently used the smaller gain here as well.

Finally a few words on processing. As I said before, my puritan calibration process served me well here with the new CMOS camera. I took enough data that I could be moderately selective with which frames to use. I used a technique that I applied before with LRGBHa processing. I think the outcome is a little too purple in this case. Later this Fall I may return to the data and try again, but for now I'm busy taking frames of new targets through the summer months.

Overall, I'm pleased with the first-time use of this camera. As I said before, I have much to learn. I have not settled on good gain setting / exposure time practice as I hope to be able to not saturate so much at such short exposures.

I am indeed aware that there are more advanced CMOS cameras available, and I expect I'll be upgrading to one of them at some future time, however likely after a CCD failure. Until then, I must admit that I continue to favor my CCD's for their much more familiar use, higher well capacity, higher bit range, larger FOV, etc. But, I know the CCD is a species that will eventually go extinct, and it won't be in my best interest to keep mine working and repaired forever.

As for the original purpose of this image, I am mostly pleased with the outcome of using my mid-range focal length scope with small pixel CMOS for higher resolution, although I think I would have liked the outcome more had I been able to image with stiller air and larger full well capacity. 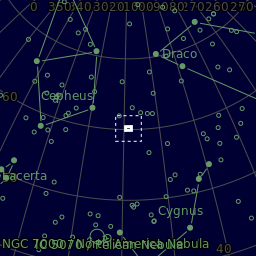