Abell 31, an ancient planetary nebula in the constellation Cancer, is a rare nebula-like object in the spring night sky. Like all planetary nebulae, it is the last glorious bloom of a low - to medium-mass star at the end of its life.

The star, which had twice the mass of the sun, burned steadily for more than a billion years before entering its final phase about 130,000 years ago, began to eject its outer gas shell in waves.

The gases, which have been spreading out at different speeds and bumping into each other, have now expanded into a complex mass about 10 light-years across.

And now, the star has also thrown away almost all of its outer material, leaving only a core about four times the diameter of the Earth, with about half the mass of the Sun, and a surface temperature of 85,000 degrees Celsius, emitting intense ultraviolet radiation.

The high-energy radiation lights up the previously ejected outer layers of gas. The vibrant colors of the Abell 31 nebula are derived from excited light from different elements, the red light from hydrogen in the outer ring, and the green light from oxygen in the center.

In fact, oxygen is everywhere in the nebula, but only near the central source of radiation is it illuminated. The nearly dead star, in the center of that mass of green light, is an unremarkable, faint blue star.

Abell 31 is asymmetrical in shape, with sharp edges on the south side (left) and blurry edges on the north side (right). This is because the star is moving southward at high speed in the interstellar medium, and the gas it throws out is compacted even more on the "upwind side."

In about five billion years, our sun will also reach the end of its life. By then, it will also throw out its outer gas shell, and at the final moment bloom the same gorgeous cosmic flower. Hopefully, there will still be humans at that time, able to appreciate it from a safe distance, just as we appreciate Abell 31 today. 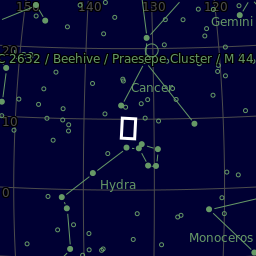