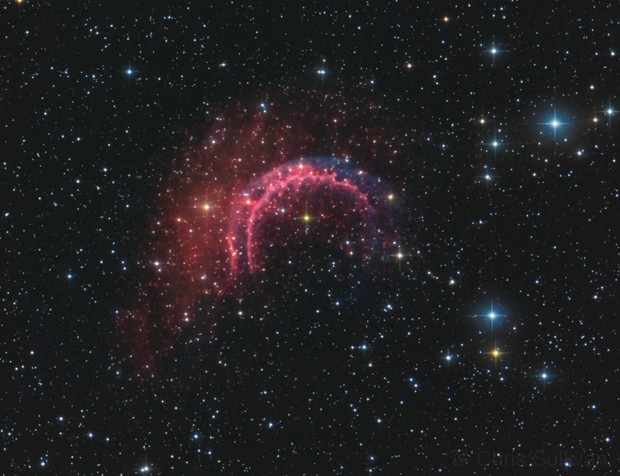 HDW3 (which I've decided to dub the 'Empanada Nebula') is an ancient and *extremely* faint planetary Nebula in Perseus. Its originator star is the blue star at about 4 o'clock (3:30?) from the brightest central star. The braided shape at the top is due to the nebula colliding with interstellar gas around it as it travels (much like with HFG1).

This is the third version (and the first color version) of this target on Astrobin and only the fourth color version done by an amateur.

HDW3 wasn't next (or even second) on my list of images to process (I'm still sitting on data from a collaboration started back in March that I do plan on processing soon!), however, a tornado unexpectedly passed nearby on Halloween night and my Newtonian, AZ-EQ5, ZWO1600, etc. was blown off my roof to my porch one story below. (I got the tornado warning about five minutes too late.) Unfortunately, my scope did not survive (mirrors are fine, but the tube was cracked right around the spider). I got off lucky - the gotos on the mount are acting weird, but it still tracks fine and everything else (besides the slightly bent stalk of my off-axis guider) survived unscathed.

I hadn't taken any red subs yet and still had some Ha I wanted to gather, but I gave the reds a go anyway on November 2. The red stack alone was terrible - the spider wasn't able to hold any tension, so collimation wasn't able to hold. However, by combining the reds with the Ha subs, I was able to create a red channel that enabled me to fudge the star color data (for the most part) and keep the stars where they should be. In short: The reason I processed this one before two other images was to see if it was possible.

Special thanks to Sakib Rasool for suggesting this target. 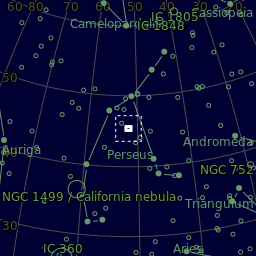