Yesterday's version was my wide field ASI6200MM on Televue NP127is piggy backed to the AG12" Newtonian with ASI178MM, a much smaller FOV, yielding much more detail in the trunk.

The final version B has stars toned down a bit from version A. I welcome input on this.

IC 1396, commonly called the Elephant's Trunk Nebula is one of my favorite targets, imaged many times, with perhaps every new iteration of hardware. No exception here. This is my first posted image from a new ZWO ASI6200mm full frame 62 mpixel camera. Pixels are 3.75 microns, but binned at 2x2 as this image is, yields 15.6 mpixels of 7.2 micron size. The camera has very low noise and dark current, essentially zero dark current. All this should contribute to improved images. And this image provides a bit of a contrast to my previous long string of very small Abell planetary nebula targets.

The camera is mounted on a Televue NP127is which is piggy backed on an Orion optics AG12" Newtonian. It also took images at the same time as these, but at a resolution of 0.44 arcsec/pixel. Hopefully that one will show up here soon, showing much more detail of the trunk. I centered the trunk on the small FOV of the AG12, which controls the mount, but as you can easily see, the trunk is no where near center on the ASI6200 image. Poor alignment of the two telescopes. But I just installed the ASI6200 and have not had time to align the two scopes. Probably won't. A new Planewave ODK 14" is shortly going to replace the AG12.

Another slight deficiency with this image is I have not installed the flat field lens, which is necessary when using a full frame camera to prevent elongated stars around the outer edges of the frame. My excuse is I had not yet received the spacers required for proper spacing of the lens. However, a little cropping of the image has, I think, eliminated the offending stars.

From Wikipedia:
The Elephant's Trunk Nebula is a concentration of interstellar gas and dust within the much larger ionized gas region IC 1396 located in the constellation Cepheus about 2,400 light years away from Earth. The piece of the nebula shown here is the dark, dense globule IC 1396A; it is commonly called the Elephant's Trunk nebula because of its appearance at visible light wavelengths, where there is a dark patch with a bright, sinuous rim. The bright rim is the surface of the dense cloud that is being illuminated and ionized by a very bright, massive star (HD 206267) that is just to the east of IC 1396A. The entire IC 1396 region is ionized by the massive star, except for dense globules that can protect themselves from the star's harsh ultraviolet rays. 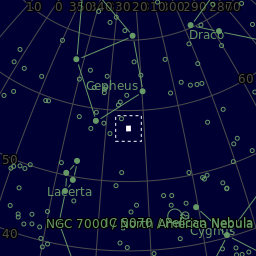