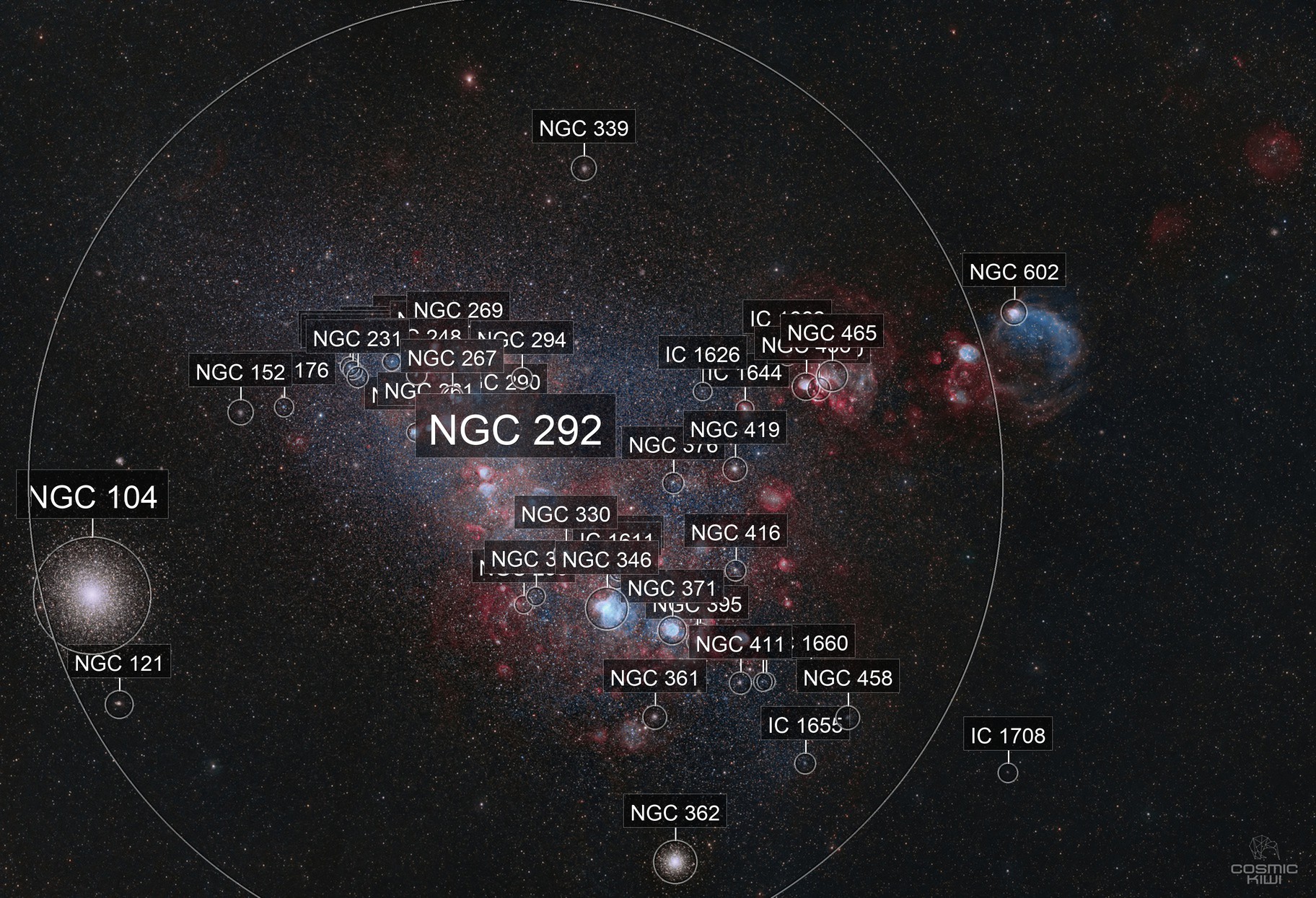 The Small Magellanic Cloud (SMC) is an irregular dwarf galaxy, which is located ~200000 light years away.  The SMC is thought to have once been a barred spiral galaxy but it has been disrupted and shaped by interactions with it’s neighbours, the Large Magellanic Cloud and the Milky Way galaxy. These interactions result in intense ram pressures and gravitational tidal shocks which have stripped and re-distributed material from the SMC forming an extended envelope of ionised gas.  This ionised gas is located in an extended halo but also in a number of large, faint ionised structures.  One structure is the SMC tail and the Magellanic bridge, which connects the SMC to the LMC, and this was formed from an interaction which occurred ~200 million years ago.  The other main structure is the Magellanic stream, a giant cloud of gas which extends over 100 degrees from the SMC and LMC towards the Milky Way. When starting the project, my aim was to try to capture a deep image of the SMC and to try to show some of this extended halo. To capture both 47 Tuc and the start of the Magellanic Bridge, this was framed as a 3 panel mosaic.

Revision B https://www.astrobin.com/mikywq/B/ is a heavily stretched starless Ha false colour image highlighting the extended emission halo structures.  You can see the SMC tail/bridge extending to the top right, and faint filaments towards the bottom of the frame which appear to extend towards the Magellanic stream.  At the top left, there are two faint emission objects (circled white) in the outer halo, and I believe this is the first image to clearly show these faint objects.

To get an idea of the extent of the ionised halo, I aligned and overlayed my Ha falsecolour map with the Ha emission map detected by the Wisconsin Ha Mapper (WHAM) as published by Smart et al, 2019 -see Revision C https://www.astrobin.com/mikywq/C/ . WHAM is a 0.6m scope with a  Fabry-Perot spectrometer designed to investigate the warm interstellar medium. It’s design allows it to record a spectrum from a 1 degree area of sky, allowing WHAM to detect extremely faint emission albeit at a low spatial resolution. In this image you can see the WHAM Ha emission extending even further to the right into the Magellanic bridge and downwards into the Magellanic stream.

In my image you can also just discern some of the faint outer stellar halo of the SMC, which appears to give the SMC a slightly unfamiliar shape. Low surface brightness stellar halos and stellar streams are predicted in hierarchical galaxy formation models as a result of a succession of merger events with lower mass systems. To check this halo, I created an outline of the outer SMC halo from a stellar density map of the SMC made with Gaia DR2 sources as published in Mart ́ınez-Delgado 2019. Revision D https://www.astrobin.com/mikywq/D/ shows this outline overlaying a similarly aligned crop of my image, and you can see the stellar density halo outline closely matches that in my image.

Description: Overlay of WHAM data with my starless Ha emission