A perfect object to start late each evening (2 AM to 5 AM) after capturing Abell 370.

I was able to use the same camera settings with no overexposure. The ASI6200 (Sony IMX455 CMOS) is amazingly configurable with a huge dynamic range when the gain is set to 0.

"NGC 2903 is an isolated barred spiral galaxy in the constellation of Leo. It was discovered by astronomer William Herschel, who cataloged it on November 16, 1784. He mistook it as a double nebula, as did subsequent observers, and it wasn't until the nineteenth century that the Third Earl of Rosse resolved into a spiral form.

NGC 2903 is located about 30 million light-years away, and is a member of the Virgo Supercluster. The morphological classification of this galaxy is SBbc, indicating a barred spiral with moderate to tightly-wound spiral arms.

NGC 2903 exhibits an exceptional rate of star formation activity near its center, also bright in radio, infrared, ultraviolet, and x-ray bands. Just a little smaller than our own Milky Way, NGC 2903 is about 80,000 light-years across.

The irregular dwarf galaxy KKH 51 appears to be a companion, as they have an angular separation of 25′ and nearly the same radial velocity." 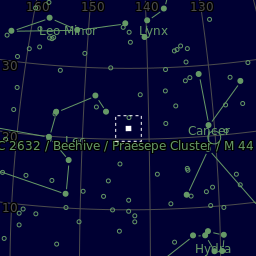