I was looking for a good target during nearly-full Moon that would benefit from narrowband filters. I have been wanting to try this one for some time since my last attempt was in 2015. After getting some OIII data that looked OK, I switched to Hα and immediately noticed a huge focus shift and brighter-than-expected stars. I surmised that the filter had probably come out of its slot in the filter wheel, so went on to get R, G, & B. When I took the filter wheel apart the next day the Hα filter had indeed fallen out along with one of its mounting screws. I found a number of other loose mounting screws, so snugged them up and put the Hα back. Processing this image was extremely challenging. I tried mixing various filters into the color channels, but I eventually opted to use OIII as L + HαGB synthetic L and HαGOIII for the color information. This gave stars that were quite green, so I had to reduce the green bias way beyond StarTools’ default. I attempted to image the core using unstretched 10- and 5-sec OIII and Hα, but this was only marginally successful; I don’t have the needed focal length (and probably don’t have the needed skill!). I can see some of the shape of the central part of the nebula. It was challenging to mix it in without making it look a mess. Overall, it’s better than my last attempt, although that’s not saying much. This is one of the most interestingly-structured planetary nebulae I have imaged; it looks like ink splashed on a photograph, leading me to wonder what caused all the knots and whorls. Wikipedia indicates that the central star is a Wolf-Rayet star, and that made a lot of sense to me as these tend to produce fascinating shapes in the surrounding nebula. So maybe this is more properly a wind nebula rather than a planetary. 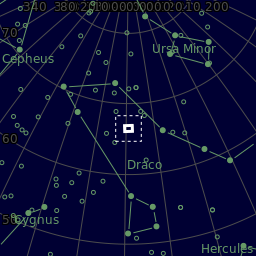