CED 111, Chameleon I Cloud, lies at -77 deg declination, a distance of only 500 ly, and far enough above the galactic plane such that foreground stars are scarce. This positions it well for identifying and characterizing faint young stars-and young stars abound. The overlay locates abundant YSOs (Young Stellar Objects), HH (Herbig-Haro Objects), TTau (T-Tauri ) pre-main sequence stars, IR stars, and proto-stars. Infrared observations detect most of the latter three objects, which range from accreting and compressionally heated gas/dust balls still embedded in their parent cloud to very recently ignited stars. At the tip of the red-orange streak at about (11h 9m , -77d 44m) are two T-Tauri stars, and a reasonable interpretation is that the streak itself is a flare of heated gases driven by the recent ignition.

Unlike many other star nurseries (e.g., M 78, IC 2944, NGC 1769, NGC 6334,....), which boast giant O and B stars in their stellar nurseries, CED 111’s new stars, predominantly, are low mass . Not unreasonably, different star-formational processes could account for this difference. The new stars forming in CED 111 largely arise from gravitation, cold accretion from a relatively low-density cloud, as opposed to the violence-driven accretion in the OB nurseries where shock-waves from mechanisms like cloud-cloud collisions, and the ignition of the giant stars themselves, create high-density knots in the nebula that perpetuate star-burst activity. 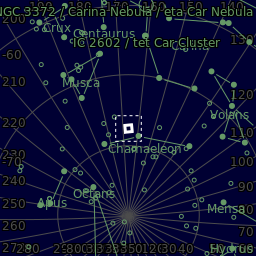