This is first light for my QHY5III462C camera (well first astronomical object presented here) with the intention of learning more about its NIR capabilities. I have only taken a limited number of subs (40) of short duration (limited by no guider). The telescope used was my 5 inch Mak/Newt at f6, no glass other than the front corrector plate. I chose NGC 7023 as the target because it is oft photographed and has been studied in detail over many years by professional astronomers at many different wavelengths. So hopefully a good target to see what I can do with this setup. The top panel is data of an image taken (45sec subs) using the 950nm edge filter. I present it here in false red just to be sure there is no confusion. The bottom panel is RGB, presented as mono, taken with the same setup but with a UV/IR cut filter. (I haven't figured out how to do the mouse over "blink" presentation of such images yet, which may have been a better way of doing this.) There is relatively minimal processing, with registration of the two frames, cropped because I rotated the camera a bit while changing the filters and then a stretch on each panel to try to achieve similar total signal and S/N to reduce background interference for interpretive purposes. So other than background, I believe that these are pretty representative of the individual subs, albeit with a bit less noise because of the advantages of integration.

1. I believe that the 950 edge filter is quite good at cutting signal below 900nm and the camera lives up to its stated capabilities of NIR sensitivity at these wavelengths. Efficiencies of ~60% at 950nm and 40% @ 1000nm. I suspect that I am getting significant signal well above 1000nm and I might try to push this to 1500nm when I get a larger aperture telescope without glass. As expected the image best matches the 2 micron All Sky Survey data and, of course, cannot approach that of the Wide-field Infrared Survey, which explores much longer wavelengths (much lower temperatures). In other imaging that I have done with this, the camera appears ideal at seeing stars that are on the cool end of the spectrum, such as red giants and red dwarfs, i.e. those with surface temps of ~2,000-3500K. I stumbled upon T-Cep, the red supergiant nearby 7023 and it just rocked! Way more luminous with my IR950 filter than with the UV/IR cut.

2. Clearly the filter is capable of eliminating the signal from the short wavelengths, such as the very blue reflection nebula of 7023. I will let you guys do the star by star comparison to find stars that are seen at >950nm but not in visible or visa versa.

3. Some of the IR only visible stars near the main star HD200775 may well be stars otherwise buried within the very dense shock densified clouds of the nebula. I certainly cannot prove this because they could also just be red dwarfs, but I remain hopeful!

4. If this setup (IR950 filtered) efficiently eliminates the shorter visible wavelengths, what of the extreme brightness of HD 200775 itself? Well, that is an interesting story in itself and I will write more on that below.

5. Not on this target, but on others nearby, I have confirmed that I can see some signal from stars known to be buried within molecular clouds. But I believe the restriction to the shorter IR wavelengths will be seriously limiting in this regard. I will need to live with this. Hopefully longer sub times and integrations will improve that capability.

Overall, I am pleased with this first light experience. However, I will not be doing that much more until such time as I get an appropriate mount for my 5 inch or other new telescope (Now justified, right! Tell my wife!). With that gear, I will be able to push exposure time limits and thereby possibly see deeper into areas of interest. I hope to do so reliably and thus allow me to do some time-dependent photometry, etc. Given that >70% of all stars are red dwarfs, I am happy that I can begin to open the world to this part of the universe. Additionally, as I describe below for HD 200775, many young stellar objects are particularly bright in the NIR and are of interest because of their close association with their source molecular clouds and circumstellar dust rings and protoplanets. Red dwarfs are also of interest because they tend to be more active regarding substantial large-scale flairs and eruptions.

Now to address HD 200775, a Harbig Ae/Be object/star). This object technically may not yet formally be a star! Data suggests that this object is very likely a pre-main sequence star, or rather still a star in formation. I emphasize it not being a star, even though it is typically referred to as a star only to emphasize the fact that it is believed to not yet harbor hydrogen fusion at its core. This most certainly will happen in the near future. In researching these facts, I have learned a lot of things that shattered my conception of how stars actually form, or at least stars of a certain mass class, of which our sun is part. You might ask, well as an extremely bright blue star, how can this be? I always thought that stars form by the gradual, methodical collapse of gas and dust clouds, gradually getting hotter, redder and brighter at the center of this whirlpool until the center of the mass gets dense enough for fusion to start up the star. That once the fusion starts, there will then be enough energy for the star to present its brightest and best surface luminance. Hence a star is born! Well it is more complex than that. The problem that stars face (i.e. especially those that are sub 10 solar masses) is that the dense protostars are largely fully convective. That is the material that falls to the center heats and then mixes back up to the surface. This carries that heat out of the center, thus cooling it. This homogenizes the protostars and actually interferes with the accumulation of sufficient heat to achieve the millions of degrees needed for actual hydrogen fusion. At the same time, this superheated material from the center is very hot and thereby can make such protostars' surface be very hot, even blue hot. HD 200775 has a 19,000K surface temperature without hydrogen fusion! So yes, dense pre-star cloud masses can achieve very high surface temperatures via gravity contraction alone and without fusion. Astronomers know this partly because elemental data (from spectroscopy) has identified the presence of elements that could only be seen if a star if still fully convective and stirring up those things from within. At its current stage, HD 200775 may harbor deuterium fusion, but the low abundance of this isotope of hydrogen and relatively low fusion output cannot be sustained without convection to bring new deuterium into the relatively cool center. This may actually sustain this convective stage of the newly forming star briefly, after which gravity contraction proceeds and the core becomes the tens of millions of degrees necessary to light the hydrogen fusion furnace of a bona fide main sequence star. It also then leads to internal stratification and ironically surface cooling for those in the lower mass end of the spectrum. In this case, HD 200775 is thought to be roughly 8-10 solar masses and will always look hot and blue. These Herbig Ae/Be stars of 8 solar masses or below develop from pre-main sequence to main sequence slowly enough to allow the protostars to blow away enough of the gas envelope to become easily visible to our eyes and telescopes, even in the visible. NGC 7023 is a prime example of how these stars carve out a hole in the clouds. Stars of larger mass likely go through a similar sequence, but do so much more quickly and likely achieve main sequence status faster than they can clear the space around them. So they may not be as easy to discover. Perhaps, the Herbig/Haro objects represent the latter and we can only see external evidence of the dynamics as jets and red gas being caused by new hot stars still deeply buried.

So after that very long intro to star formation, what has that got to do with HD 200775's strong IR signal that I see? Even though this star is 19,000K hot and not emit much in the way of IR, because this is such a new star, it still has considerable interstellar debris very closely associated with it. This material believed (with evidence) to include a circumstellar disk of planets, planetesimals, and other debris as well as remnant interstellar dust. It should also be stated that this star is a binary with what is thought to be a 3 solar mass companion (similar stage of development). It may even have a third 0.5 solar mass protostar component. The IR signal is coming from the considerable heating of this material by these stars and all that stuff is emitting at 2,000K and above. In any case, it is cool to be able to see some of that first hand. 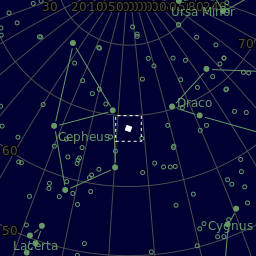