There are some interesting objects to be seen in this widefield of the Milky Way. Among other things, the dark nebula "VDB 126" and "LBN 134". VDB 126 and LBN 134 are 2 blue reflection nebulae in the constellation Vulpecula, surrounded by numerous dark nebulae. The gas and dust in the nebula reflects the light of HD 182918, a blue main sequence star, whose apparent magnitude is 8.7 - distance: 2720 Light Years.

A dark nebula or absorption nebula is a type of interstellar cloud that is so dense that it obscures the visible wavelengths of light from objects behind it, such as background stars and emission or reflection nebulae. The extinction of the light is caused by interstellar dust grains located in the coldest, densest parts of molecular clouds. Clusters and large complexes of dark nebulae are associated with Giant Molecular Clouds. Isolated small dark nebulae are called Bok globules. Like other interstellar dust or material, things it obscures are only visible using radio waves in radio astronomy or infrared in infrared astronomy.

Dark clouds appear so because of sub-micrometre-sized dust particles, coated with frozen carbon monoxide and nitrogen, which effectively block the passage of light at visible wavelengths. Also present are molecular hydrogen, atomic helium, C18O (CO with oxygen as the 18O isotope), CS, NH3 (ammonia), H2CO (formaldehyde), c-C3H2 (cyclopropenylidene) and a molecular ion N2H+ (diazenylium), all of which are relatively transparent. These clouds are the spawning grounds of stars and planets, and understanding their development is essential to understanding star formation.

The form of such dark clouds is very irregular: they have no clearly defined outer boundaries and sometimes take on convoluted serpentine shapes. The largest dark nebulae are visible to the naked eye, appearing as dark patches against the brighter background of the Milky Way. These naked-eye objects are sometimes known as dark cloud constellations and take on a variety of names.

In the inner outer molecular regions of dark nebulae, important events take place, such as the formation of stars and masers.

In the lower part of the picture you can still see NGC 6820 & NGC 6823. NGC 6820 is a small reflection nebula near the open cluster NGC 6823 in Vulpecula. The reflection nebula and cluster are embedded in a large faint emission nebula called Sh 2-86. The whole area of ​​nebulosity is often referred to as NGC 6820.

Open star cluster NGC 6823 is about 50 light-years across and lies about 6,000 light-years away. The center of the cluster formed about two million years ago and is dominated in brightness by a host of bright young blue stars. Outer parts of the cluster contain even younger stars. It forms the core of the Vulpecula OB1 stellar association. 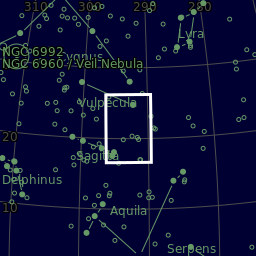