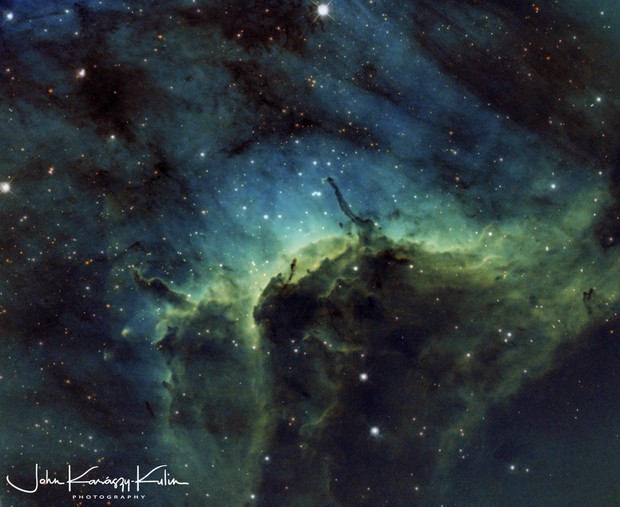 This had an interesting tale, I was browsing through my files trying to work out what I was next going to capture and I came across the data that I had captured in September 2018 from the Pelican nebula which I had never processed...why...God Knows, but I thought I would have a good look.

First thing is that I had not taken any flats, thankfully I had kept my master Bias and Darks, so I thought I would have a play.

I had a small gradient in the top right that I cropped out, but the biggest thing was that I had some horrible halos from the Optolong filters I was using at the time and my guiding was far from perfect.

So I thought time to learn to remove the stars, create a Lum in grey scale of the stars, process in morphological transformation and then use Pixelmaths to add it back in, it worked, first time of trying that.

This is far from perfect, but it was a great learning tool, showing that you can work on poor images and get something okish out of them.

The Pelican Nebula (also known as IC 5070 and IC 5067 is an H II region associated with the North America Nebula in the constellation Cygnus. The gaseous contortions of this emission nebula bear a resemblance to a pelican, giving rise to its name. The Pelican Nebula is located nearby first magnitude star Deneb, and is divided from its more prominent neighbour, the North America Nebula, by a molecular cloud filled with dark dust.

The Pelican is much studied because it has a particularly active mix of star formation and evolving gas clouds. The light from young energetic stars is slowly transforming cold gas to hot and causing an ionization front gradually to advance outward. Particularly dense filaments of cold gas are seen to still remain, and among these are found two jets emitted from the Herbig–Haro object 555. Millions of years from now this nebula might no longer be known as the Pelican, as the balance and placement of stars and gas will leave something that appears completely different. 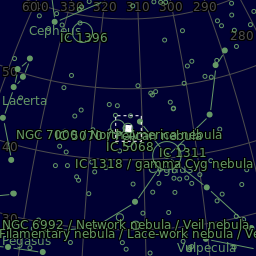