Sometimes it's less about the image, and more about the larger context, the story.

Lambda Cephei is located in a stellar association called Cep OB2. This is a very loose, very large and widely-separated association of hot, young, luminous Class O and B stars that is surrounded by an expanding cloud of dust and gas called the Cepheus Bubble. The most prominent and well-known member of the Cep OB2 is IC1396, the Elephant Trunk Nebula.

If you have lost your bearings, orient yourself by taking a look at this beautiful Cepheus Wide Field by Jeffrey Horne. Lambda Cephei is located "next door" to IC1396 at the center of Sh2-134, which comprises the majority of the nebulosity in this image.

Other HII Ionized regions (Sharpless (Sh2) objects) associated with Cep OB2 are Sh2-129, Sh2-133 and Sh2-140, all visible on Jeff's widefield. At the center of each of these are the young hot OB stars, like Lam Cep. They emit large amounts of UV radiation and ionize the hydrogen, burning it out and creating a shockwave that radiates outward from the star. When the shockwave encounters denser areas where there are other stars and protostars, the gas and dust stacks up and creates pillars, elephant trunks and ridges--the wondrous structures we love to photograph.

Lam Cep itself is a runaway star. It is moving at high speed on a seemingly independent trajectory, creating a shockwave ahead of it, as seen in this image. The explanation for this movement is that it was ejected by a supernova from NGC 7190 (see Jeff's image again). More recent data suggests that NGC 7190 was not the origin, but that the movement of Lam Cep was still the result of a supernova ejection. IR imaging studies of the region have now begun in the hopes that this will provide the evidence to decide the issue.

Whatever the origin of Lambda Cephei's trajectory, the power of the Class O star is on full display in this image. Large sections of HII have already been fully ionized and a vague reflection nebulosity is visible near the star with the shockwave visible further to the lower left. The star will continue on its current trajectory for several million more years, before exploding in its own supernova and possibly forcing other stars onto new trajectories.

This area is rather faint, seldom-imaged and without a recognizable structure, making it less interesting as a photograph. Nonetheless, it is a fascinating part of sky when you consider the complex history and ongoing dynamics of the Cepheus Bubble.

Thanks for stopping by and taking the time to read the story of Lambda Cephei and part of the Cep OB2 Association. I hope you enjoyed the picture-story and that it gives you some insight and inspiration.

If you haven't already, check out the other images in my Cep OB2 Series:

Part I: The Complexity of Phenomena. IC 1396 and the Power of Stars.

Also in this Image:

I'd like to thank these Astrofriends for giving me inspiration for this image. 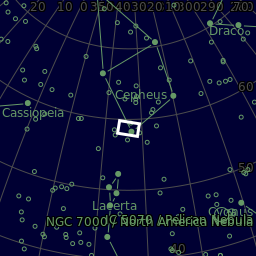