This object, also known as IC 972, is a rarely imaged faint planetary nebula located 8000 light years away in the constellation of Virgo at a declination of -17 degrees. This 13.9 magnitude nebula spans almost 1 arc-minute in our apparent view, which corresponds to an actual diameter of 2 light years.

Above information shamelessly stolen from Gary Imm who has a more detailed image with a C11 here: 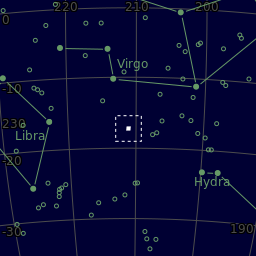