Took advantage of a clear moonless night to travel up to a Bortle 4/5 zone and enjoy some sky surfing with the Unistellar eVscope just north of the Milwaukee city lights. For M27, I've attached a VHT 1.25" Omega filter designed for nebulosity in front of the camera sensor. The VHT is designed to allow more light through, especially when observing with a smaller reflector like this. I liked the output under no moon, and it helped with the Owl Nebula as well, which I'm going to do a little added post-processing later.

Aside from some light processing to upscale, denoise a bit, there's not a ton of further work done on this, so the view here is fairly similar to what I was seeing from my tablet as I watched the photons average out and intensify live in the field. Overall, it's pretty fun for only 20 minutes of accumulation, and just 1 dark file taken. This means less time processing and more time enjoying objects under the skies. Setup was under 10 minutes down and up, which was nice when I left at 1:30am.

The software in the eVscope stacks exposures of a few seconds, over the total time you leave it on. For anyone not familiar, I'd consider the eVscope to be a cross between EAA astronomy and astrophotography.

More info from a paper published online - " the eVscope is equipped with a sensor located at the prime focus of the telescope. The sensor is a CMOS low-light detector IMX224 (1/3-type, 1.27megapixels, 12-bit, up to 60 fps) produced by Sony and characterized by a gain amplifier of up to 72 dB and a low-read noise of less than 1 e- which allows recording of multiple frames with an exposure time between 1ms and 4s. An on-board computer stacks and processes those frames (dark and background removal, shiftadding and stacking) to produce an improved image." As an EAA element, the scope also projects this view to an "eyepiece" OLED display inside the scope, plus via wireless networking.

Description: Cleared up background, reduced noise, along with a slight curve decrease in the red channel, then flattened the final to get a little closer to what you'd expect to see. This added another 10 minutes to post-processing, but keeping it light still. 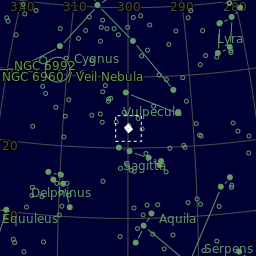