SH2-311 is a star nebula dubbed "Skull and Crossbones nebula" (the nebula of the skull and crisscrossed shins), whose appearance resembles the face of a mandrill. It includes regions where large clouds of hydrogen gas serve as star incubators. It is ionized by the ultra-hot O3 V star HD 64568, the O6 IV subgiant HD 64315, and the B0 V star LSS 830. In addition to the NGC 2467 cluster, it includes the 2 Haffner 18 and Haffner 19 clusters.

The area around the star cluster NGC 2467, located south of the constellation Poupe. With an age of a few million years at most, it is a very active stellar creche with stars forming continuously from clouds of dust and gas. The image, resembling a colorful cosmic ghost or a giant celestial mandrill, contains the haffner 18 (centre) and Haffner 19 (centre right, in the blue area resembling the lowest eye of the mandrill) as well as large areas containing ionized gas. The bright star at the center of the largest blue region at the bottom of the image is HD 64315, a massive young star helping to shape the structure of the entire nebula region. Haffner 18 is actually the overlay of 2 clusters at different distances, one at 4500 parsecs and the other between 9500 and 11400 parsecs. Haffner 19 stands it at 6400 euros/- 600 pc. This implies that only one part of Haffner18 is related to the nebula.

The image shows different stages in the formation of stars. The stars of the middle have already formed and their birth nebula has already dispersed. Below a little to the left is a very young star that detached from the cocoon of gas that surrounded it at birth (petie circular yellow zone. Right at the bottom, a wall of bright gas shines while evaporating because of the energy of the many bright stars that have just formed. Towards the center, very dark bands of dust mask parts of the nebula that surely forms new stars. 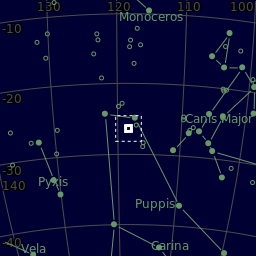