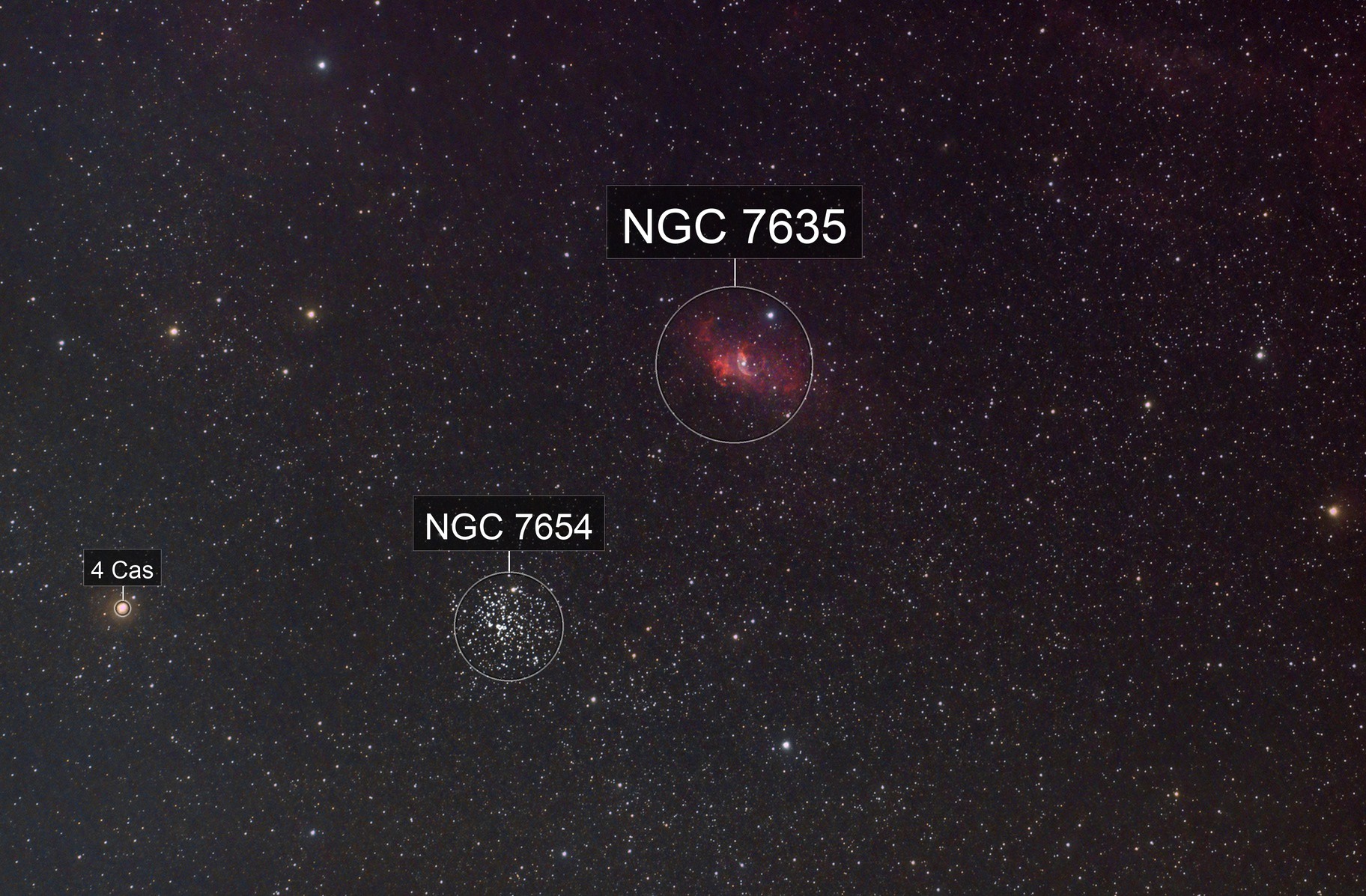 NGC7635 and M52: The Bubble Nebula and Open Cluster

NGC7635 and M52: The Bubble Nebula and Open Cluster

NGC 7635  (upper center right), also known as the Bubble Nebula, Sharpless 162, or Caldwell 11, is an H II region emission nebula in the constellation Cassiopeia.
It lies close to the direction of the open cluster Messier 52. The "bubble" is created by the stellar wind from a massive hot, 8.7 magnitude young central star, SAO 20575 (BD+60°2522).
The nebula is near a giant molecular cloud which contains the expansion of the bubble nebula while itself being excited by the hot central star, causing it to glow.
It was discovered in 1787 by William Herschel.
The star BD+60°2522 is thought to have a mass of about 44 M☉.

Messier 52 or M52  (lower center left), also known as NGC 7654, is an open cluster of stars also in Cassiopeia.
It was discovered by Charles Messier on 1774. It can be seen from Earth under a good night sky with binoculars.
The brightness of the cluster is influenced by extinction, which is stronger in the southern half.
R. J. Trumpler classified the cluster appearance as II2r, indicating a rich cluster with little central concentration and a medium range in the brightness of the stars. This was later revised to I2r, denoting a dense core.
The cluster has a core radius of 2.97 ± 0.46 ly (0.91 ± 0.14 pc) and a tidal radius of 42.7 ± 7.2 ly (13.1 ± 2.2 pc).
It has an estimated age of 158.5 million years and a mass of 1,200 M☉.  The magnitude 8.3 supergiant star BD +60°2532 is a probable member of the cluster, so too 18 candidate slowly pulsating B stars, one being a Delta (δ) Scuti variable, and three candidate Gamma Doradus (γ Dor) variables.
There may also be three Be stars. The core of the cluster shows a lack of interstellar matter, which may be due to supernovae explosion(s) early in the cluster's history.   [Source:  Wikipedia].

The image was captured with the iOptron CEM120 mount , the TMB80SS F6.3 Refractor coupled with an Orion Field Flattener , and my old Canon 450D XSi camera.

All subs were taken a ISO1600 and 300s each.  All were done at ambient temperature that varied between 32C and 38C.

COMMENTS:
My trusty Atik 383L+mono CCD camera continues to be somewhere in Portugal. At this point I suspect it will get to its destination.  Then I’ve got to decide whether or not to have it repaired.
This is the second “halfway” decent image done with my old trusty Canon 450D XSi.  The first was NGC6992 The Western Veil Nebula.
Again I’m a little amazed that it was able to capture a respectable image.

There is a bit of slight-of-hand done with the processing of this image featuring both the Bubble (NGC7635) and M52, the open cluster.  In PixInsight, the script Game from Hartmut and the process StarNet  from Nikita figure prominently in the task. 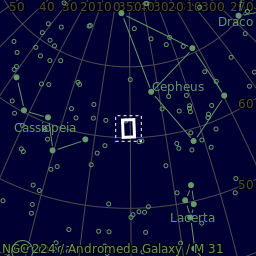