The title is a bit contradictory because it is not about the Big Bang, of course, but ... let's start from the beginning.

In 1997, Peter McCullough, using an experimental camera, recorded in the Ha band a 2-degree long straight line crossing the sky.

Peter McCullough showed the photo to Robert Benjamin at the conference and they were both impressed - “In astronomy, you never see perfectly straight lines in the sky,” said Benjamin

To help interpret the LOFAR observations, Marta's "colleague" Andrea Bracco searched the GALEX archives and found a 30-degree ultraviolet emission arc crossing the studied line. Of course, it was quite a surprise: “Frankly, I could not believe that such a great structure in the sky was not known yet. I was looking at ultraviolet observations from 15 years ago, "

In 2018, Bracco and Alves invited Benjamin to collaborate on the analysis of the results.

But what is it?

Shockwave / remnant of an ancient and near supernova or other interstellar explosion. The estimated distance from Earth is 600 light years and the age is approximately 100,000 years

- 2,681 square degrees; Almost a third of sky
- The explosion may have contributed to the "Local Chimney"
- May have created low density windows to look out of our Galaxy
-- LH=Lockman Hole
-- GS=Groth Strip

Object is larger (in angle) than the previous record holder (Antlia SNR) by a factor of three, and four times larger than Cygnus Loop, Vela SNR,

All the pictures shown are minimalistic and do not have great aesthetic value (many artifacts that I have not touched) but I am most proud of it.

Due to the scale and multitude of stars, the arc is practically invisible without removing the stars, and I wasn't really sure of the effect of the efforts until the last minute - this moment and the adrenaline of displaying a photo after StarNet was priceless!

To my knowledge, this is the second image of this object in the Ha-band apart from the two degrees from 1997. The image shows only about 10 degrees of the 30 that are discovered and visible in ultraviolet. 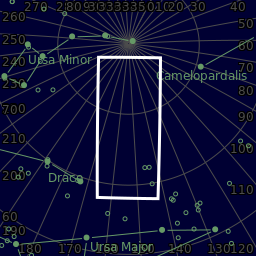