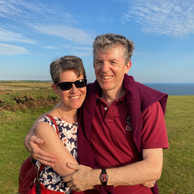 I was always interested in astronomy, even as a child. I had a 3" refractor on an alt az wooden tripod, but always found it difficult to find anything except the moon!

Later at university studying physics, I took a couple of optional modules on cos…

I was always interested in astronomy, even as a child. I had a 3" refractor on an alt az wooden tripod, but always found it difficult to find anything except the moon!

Later at university studying physics, I took a couple of optional modules on cosmology and astrophysics. The second course given by Bernard Carr demonstrated how you could calculate interesting astronomical quantities with simple calculations, something that has always appealed - so I ended up studying theoretical astrophysics for my doctorate.

Sadly, I had to leave professional astronomy at this point, but on the plus side, I started to earn sufficient money to start a family - and buy a more interesting telescope.

I started off with one of the original Nexstar 8 scopes. Fantastic for visual use. I was located in Australia at the time and thoroughly enjoyed seeing the great variety of globular clusters visible in the southern hemisphere.

On my return to the UK, I got fed up with just seeing "faint fuzzies", particularly from my urban location near London. I decided to buy a Meade DSI and try imaging, but discovered it was difficult to even get an object on the small chip, and the tracking of the Nexstar was nowhere near good enough. A discussion a couple of years later with Neil Phillipson of Astronomia in Dorking and I bought an HEQ5 pro, much more suitable for imaging.

I remember being delighted when I first captured a somewhat blurry image of M81! I rapidly followed this with a purchase of an Atik 314+, and I finally started getting some more impressive images, though just mono.

A chance meeting with Antonio Rodriguez of Astrocamp in Nerpio at Astrofest started me thinking about how nice a permanent set up would be, and the hosting fees seemed affordable. My set up now includes a Paramount MX and an 8" Ikharos RC from Ian King Imaging, along with a set of Baader filters for colour imaging. Still learning how to use this to its best advantage, but have got some great support from Fernando and Ricardo at Astrocamp, as well as encouragement from Samuel and Salvatore from astrobin, who also have scopes in Nerpio.

Tennis. In addition, I run a taxi service for my daughters.