From Wikipedia: "M94 is classified as having a low ionization nuclear emission region (LINER) nucleus.[8] LINERs in general are characterized by optical spectra that reveal that ionized gas is present but the gas is only weakly ionized (i.e. the atoms are missing relatively few electrons).

M94 contains both an inner ring with a diameter of 70 arcseconds and an outer ring with a diameter of 600 arcseconds. These rings appear to form at resonance locations within the disk of the galaxy. The inner ring is the site of strong star formation activity and is sometimes referred to as a starburst ring. This star formation is fueled by gas that is dynamically driven into the ring by the inner oval-shaped bar-like structure.[9]

A 2009 study[10] conducted by an international team of astrophysicists revealed that the outer ring of M94 is not a closed stellar ring, as historically attributed in the literature, but a complex structure of spiral arms when viewed in mid-IR and UV. The study found that the outer disk of this galaxy is active. It contains approximately 23% of the galaxy's total stellar mass and contributes about 10% of the galaxy's new stars. In fact, the star formation rate of the outer disk is approximately two times greater than the inner disk because it is more efficient per unit of stellar mass.

There are several possible external events that could have led to the origin of M94's outer disk including the accretion of a satellite galaxy or the gravitational interaction with a nearby star system. However, further research found problems with each of these scenarios. Therefore, the report concludes that the inner disk of M94 is an oval distortion which led to the creation of this galaxy's peripheral disk.

In a paper published in 2004, John Kormendy and Robert Kennicutt argued that M94 contains a prototypical pseudobulge.[7] A classical spiral galaxy consists of a disk of gas and young stars that intersects a large sphere (or bulge) of older stars. In contrast, a galaxy with a pseudobulge does not have a large bulge of old stars but instead contain a bright central structure with intense star formation that looks like a bulge when the galaxy is viewed face-on. In the case of M94, this pseudobulge takes the form of a ring around a central oval-shaped region.

In 2008 a study was published[11] showing that M94 had very little or no dark matter present. The study analyzed the rotation curves of the galaxy's stars and the density of hydrogen gas and found that ordinary luminous matter appeared to account for all of the galaxy's mass. This result was unusual and somewhat controversial, as current models do not indicate how a galaxy could form without a dark matter halo or how a galaxy could lose its dark matter. Other explanations for galactic rotation curves, such as MOND, also have difficulty explaining this galaxy.[12] This result has yet to be confirmed or accepted by other research groups, however, and has not actually been tested against the predictions of standard galaxy formation models."

If you look very carefully and use your imagination, you can just about discern a structure in the outer ring emerging . . . all very pleasing. 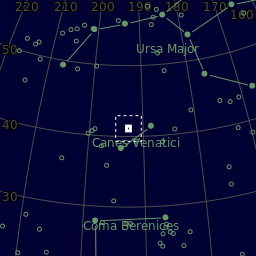