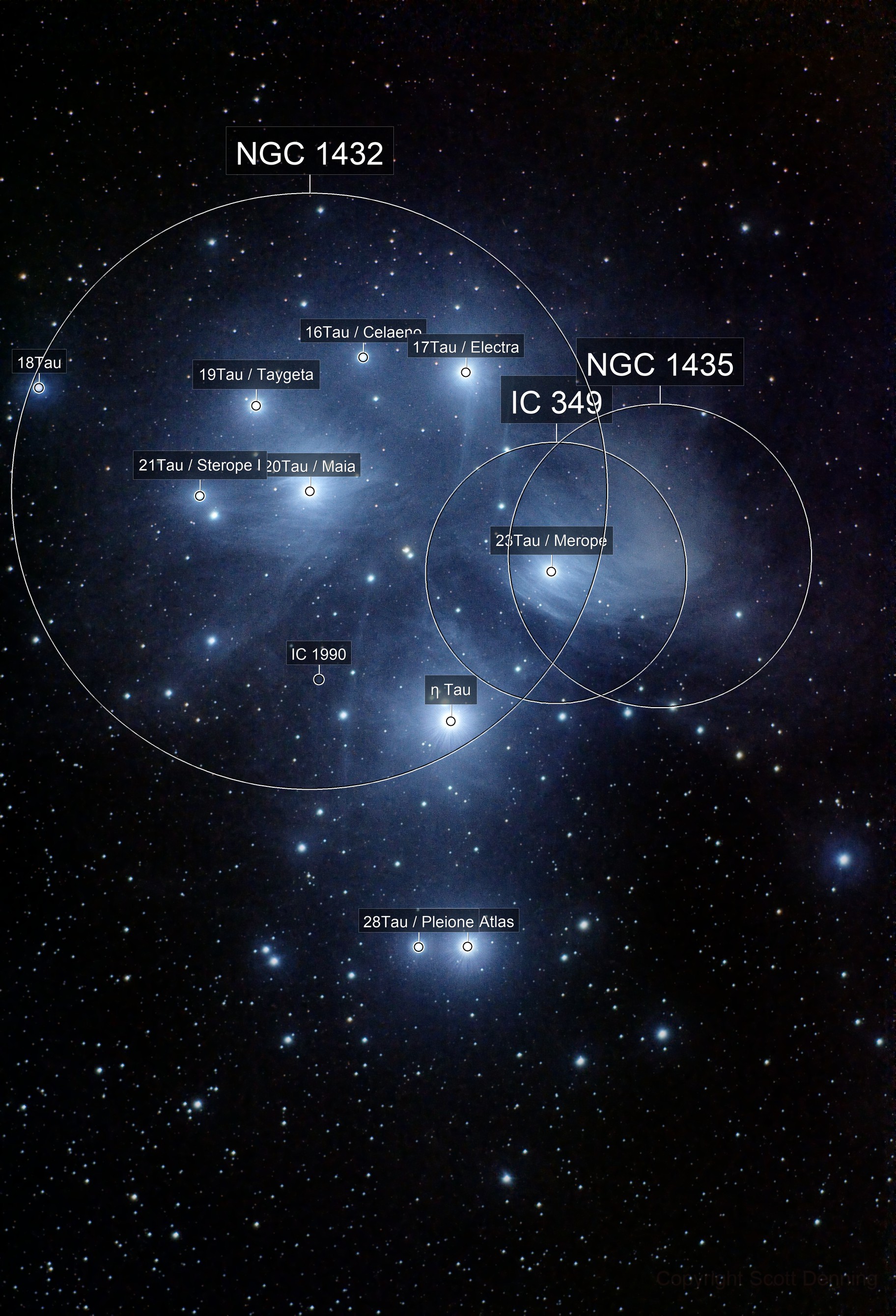 Angelic apparition of stardust, filaments of frosty glitter in the winter sky. Bring many names!

Pleiades: Seven daughters of divine Pleione and Atlas in ancient Greece: Alcyone, Electra, Maia, Merope, Taygeta, Celaeno, and Asterope. Remirrath: the Netted Stars in Tolkien’s Lord of the Rings. Subaru in Japan, for which the carmaker is named. Colloquially M45: the 45th little white cloud of nebulosity on Charles Messier’s list of “not comets” which he faithfully catalogued from a stone tower in the inky black night of 18th Century Paris.

The lovely strands of glitter lit by the Pleiades are in fact a cloud of dust through which the young cluster happens to be passing, in our celestial neighborhood a mere 400 light years from Earth. We look through our own local spiral arm of the Milky Way to see these gems in the early Modern period, when James was King in England and the Ming yet ruled in China.

As I’ve written so often before, the disks of spiral galaxies are filthy with the dusty debris of previous generations of stars. Spiral waves of creation sweep through, igniting clusters of blazing new stars like the Pleiades. The largest in any cluster live fast and die young, transmuting their hydrogen into heavier elements so quickly that the spiral arm has scant time to move along before they spew carbon and oxygen and silicon into the space around them. Wave after successive wave leave the disk rich in sparkling mineral crystals and brown-black organic soot.

Most of the time the dirt between the stars is invisible to us, blotting out the stars behind as if a great darkness had swallowed the light. But the Pleiades are so young and hot and bright that they illuminate the dusty galactic disk, their incandescent blue sparkling from the myriad particles and scattering the starlight to our visual delight. The swirls of dust glow by the same physics that makes our daytime sky blue – red photons are absorbed but blue ones reflect and scatter, creating a diaphanous sapphire curtain in the winter night.

There are WAY more than 7 of these stars! Most people can either count 6 or 9, depending on their eyesight. In reality there are hundreds. The stars are less than 100 million years old (50 times younger than our Sun). They’re old enough to have cleared the debris from which they were formed through the pressure of their own blazing nuclear fires, but have recently flown into this dense dusty cloud. They’re young enough to remain in their birth cluster, and by the time they’ve swung around the galaxy once their gravitational dance will sling one another out to join the general swarm.

In Greek myth these sisters are siblings of their neighbors the Hyades, another young cluster even closer to Earth. Each fall I greet these sparkles as harbingers of winter and the lumbering behemoth of Orion who follows closely behind in the stellar march.

This is about an hour of exposure (261 x 15 seconds) over two evenings during the waxing moon, shot at a focal length of 488 mm with a 5-inch refractor (Borg 125SD f4) and a one-shot color camera (ASI 294). Unguided on a 10Micron mount. Captures are done in KStars (ubuntu linux) and processing is done with PixInsight on a mac. 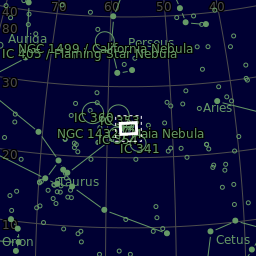