This object is the magnificent Hercules Galaxy Cluster, consisting of 200 galaxies located one half billion light years away in the constellation of Hercules at a declination of +18 degrees. The cluster's brightest member is the giant elliptical galaxy NGC 6041, shown at the right center of the image.

Three Arp objects are captured in this tight field of view, in a horizontal row across the center of the image. A fourth Arp object, Arp 172, is just below the bottom of this image. This is the tightest grouping of Arp objects to my knowledge. I captured a wider view of this area in a previously posted image.

Arp 71, consisting of NGC 6045 and PGC 84720, is the wavy edge-on spiral galaxy and companion just left of image center. This galaxy is almost 200,000 light years in diameter and obviously has been disturbed by its companion. Usually the center of galaxy clusters are occupied by large elliptical galaxies. It is unusual to see such a large spiral galaxy at the center of this one.

Arp 272 is the trio of galaxies to the left. This object consists primarily of 2 interacting face-on spirals, NGC 6050 to the left and IC 1179 to the right. NGC 6050 looks yellow while IC 1179 looks blue. There is also a third companion galaxy just above this pair. This small galaxy is not identified in the Astrobin mouseover.

Arp 122 is the similar spiral NGC 6040 to the right, shown with an elliptical companion PGC 56942. The spiral has interesting structure and color.

Two of my favorite parts of this image are not even Arp objects. I love the two edge-on end-to-end spiral galaxies at upper left, PGC 57064. Below this object is the interesting ring galaxy PGC 57073. It has a yellow core, an inner blue region, and a fascinating outer ring.

Although the above galaxies are the highlights for me, there many other cool galaxies scattered throughout this part of the sky. 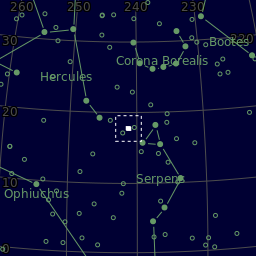