This Astrobin Debut Object, also known as NGC 3303, is a pair of interacting galaxies located 300 million light years away in the constellation of Leo at a declination of +18 degrees. The bright portion of this magnitude 15 object spans about 50 arc-seconds in our apparent view, which corresponds to a diameter of 70,000 light years. The star cloud halo extends 300,000 light years across.

In his Arp catalog, Dr. Arp classified this object into the category of Galaxies with Narrow Filaments. Looking at the Arp image on the mouseover, you will see a spike protruding up from the object. Dr. Arp believed that it was part of the object, but years later it was discovered to be an asteroid trail. This is yet another example of how we can be misled visually by the effect of object superposition. I am sure that he felt there is no way that such a trail could be timed and located so “perfectly” as to appear to be protruding from the galaxy core. An unfortunate result of his only taking one image of this object, due to time demands on the largest telescope in the world at that time.

This misinterpretation of an asteroid trail by Dr. Arp does not seem like a big deal to me, but there was quite a bit written about this error including a scientific paper ("Sharp Jet in Arp 192 Identified as Main-Belt Asteroid", by Jeff Kanipe). Although a lot of attention has been given to this false spike, somehow very little has been written about the much more important issue at hand - the nature of the object itself.

This object appears to be two galaxies in a late stage merger, based on interpreting the 2 bright areas as 2 galaxy core remnants. My guess would be that, prior to the merger, one galaxy was a spiral and one was an elliptical, based on the star streams, star cloud halo, and faint shells that are seen. I love the nature of the star streams here. It is not often that an object has both a strong star stream tail and a star cloud halo. 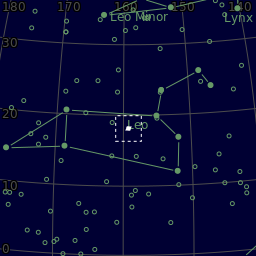