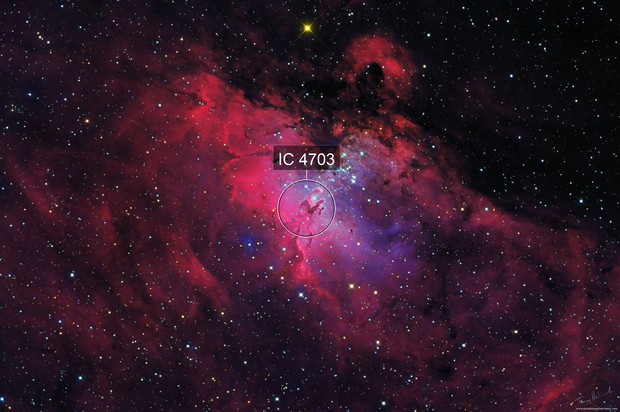 Captured from Grand Mesa Observatory, both the WO 12" RC and QHY600 Mono CMOS are coutesy of and recently supplied by William Optics. I was so encouraged by these great results and with permission from William Optics this setup is now available as an option "System 5" on GMO's subscription plans.

The incandescence of the Eagle Nebula is laced with intricate dark lanes, globules, and huge clouds of dust which shroud ongoing star formation from direct view. The most prominent dark structures are the so-called “Pillars of Creation”, three long fingers of gas and dark dust nearly ten light years long. The Pillars are a field laboratory for the study of star formation and have been examined intensely by astronomers at visible, infrared, and ultraviolet wavelengths. Within the Pillars are much smaller, warmer, and denser regions called evaporating gaseous globules (EGGs), some of which contain just a few solar masses. The EGGs are ground zero for star formation, though it’s difficult to catch these new stars in the act of igniting because they remain obscured by cloaks of dark dust. EGGs located near bright stars are elongated by winds of light and charged particles into what look like schools of celestial tadpoles.

The stars within the Eagle Nebula appear to be in an intermediate state. Stars within the Pillars and other dusty regions remain obscured, while a cluster of some 400 new stars clearly appears in a more transparent section of the nebula. The largest of these stars has a mass some 80 times that of our Sun and the luminosity of perhaps a million Suns. The cluster formed just 2 to 5 million years ago. The nebula itself is only slightly older.

The light we see from the Eagle Nebula and its associated stars left some 7,000 years ago, but some astronomers suspect the Pillars of Creation may have already been obliterated when a massive young star within the nebula detonated as a supernova. The Spitzer Space Telescope detected evidence of a patch of hot gas near the Pillars which may have been caused by such an event about 8,000 years ago. Information from our e-book https://cosmicpursuits.com/astronomy-courses-and-e-books/armchair-astronomer-volume-1-nebu 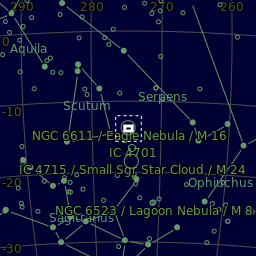