This Astrobin Debut Object, also known as UGC 9618, is a pair of magnitude 15 interacting spiral galaxies located 0.5 billion light years away in the constellation of Bootes at a declination of +25 degrees. Each galaxy of this pair spans 40 arc-seconds in our apparent view, which corresponds to a diameter of 100,000 light years.

In his Arp catalog, Dr. Arp classified this object into the category of Double Galaxies. Detailed studies of this object have revealed a shared gas envelope, confirming that these 2 are indeed in the early stages of interacting. Based on the minimal interaction so far, I believe that these galaxies are not as close as they appear visually to us, with some distance between them in the out-of-plane direction.

The left yellow edge-on galaxy is MCG+04-35-019. I like the dark dust lane that bisects the galaxy, along with the disturbed inclined halo which appears to be the start of a polar ring.

The right blue face-on galaxy is MCG+04-35-019. The arms appear a bit disturbed with some forming VV rows. The left side of the disk is noticeably brighter than the right side. 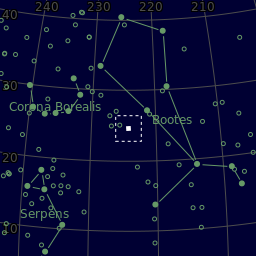