This time we present you a classic: The galaxies of the Antennae.The Antennae Galaxies (NGC 4038 / NGC 4039) are a pair of interacting galaxies located about 75 million light-years away in the constellation Raven. NGC 4038 is a barred spiral galaxy and NGC 4039 is an ordinary spiral.  The luminosity class of NGC 4038 is V and it has a wide HI line. That of NGC 4039 is also V, but it has no HI line. On the other hand, NGC 4039 is a LINER galaxy, that is to say a galaxy whose nucleus has an emission spectrum characterized by large lines of weakly ionized atoms, and it is also a galaxy with burst of star formation.A recent study reveals that these interacting galaxies are less distant from the Milky Way than previously thought, at 45 million light-years instead of 65 million light-years The antenna galaxies are the result of a galactic collision. Located in the group of NGC 4038 with at least 26 other galaxies, these two galaxies are known as "Antennas" because the two large growths formed by stars of gas and dust ejected from their galaxy during the collision resemble the antennas of an insect. The nuclei of the two galaxies are slowly merging and becoming a single galaxy.Antenna galaxies also contain a relatively young collection of massive globular clusters that may have formed as a result of the collision between the two galaxies. [8] The young age of these clusters contrasts with the average age of most known globular clusters (which are about 12 billion years old), with the formation of globulars likely coming from shock waves, generated by the collision of galaxies, compressing large massive molecular clouds. The densest regions of the collapsing and compressing clouds are believed to be the birthplace of clusters. During the collision, billions of stars will form. The brightest and most compact regions of birth are called super star clusters. . The two spiral galaxies began to interact a few hundred million years ago, making antenna galaxies one of the closest and youngest examples of a colliding pair of galaxies. Nearly half of the weak objects in the antenna image are young clusters containing tens of thousands of stars. The orange blobs in the center of the image are the two nuclei of the original galaxies and consist mainly of old stars crisscrossed by filaments of dust, which appears brown in the image. Both galaxies are dotted with bright blue regions forming stars surrounded by bright hydrogen gas, appearing in the pink image.By age dating the clusters in the image, astronomers find that only about 10 percent of the newly formed superstar clusters in the antennae will survive beyond the first 10 million years. The vast majority of superstar clusters formed during this interaction will disperse, with individual stars being part of the galaxy's smooth bottom. It is believed, however, that a hundred of the most massive clusters will survive to form regular globular clusters, similar to the globular clusters found in our own Milky Way galaxy.In several million years, the galactic nuclei of NGC 4038 and NGC 4039 will collide, becoming a simple nucleus surrounded by stars, gas and dust. Some observations and simulations suggest that these galaxies will eventually merge into an elliptical galaxy. This will probably also happen to the Milky Way when it collides with the Andromeda Galaxy.According to A.M. Garcia, the galaxies NGC 4038 and NGC 4039 are part of a group of galaxies that has at least 27 members, the group of NGC 4038. Other members of the Group's New General Catalogue are NGC 3955, NGC 3956, NGC 3957, NGC 3981, NGC 4024, NGC 4027, NGC 4033, NGC 4035, as well as NGC 405018.The group of NGC 4038 is part of the Virgo supercluster also called the local Supercluster. 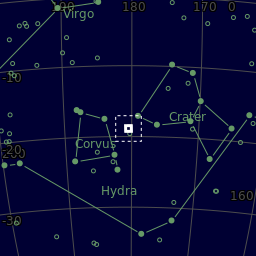