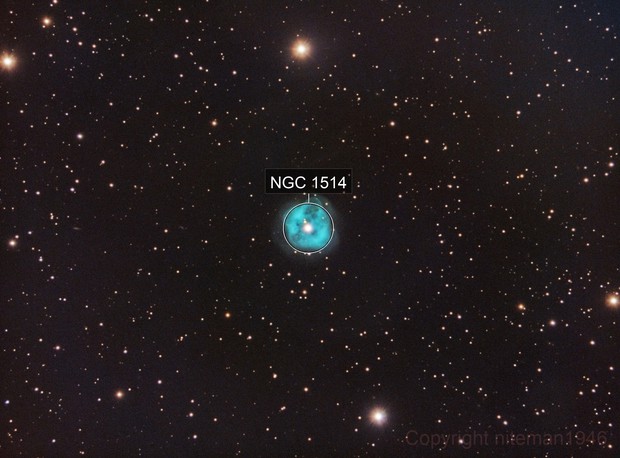 NGC 1514 is a planetary nebula that was discovered by William Herschel on November 13, 1790, describing it "A most singular phaenomenon" and forcing him to rethink his ideas on the construction of the heavens. Up until this point Herschel was convinced that all nebulae consisted of masses of stars too remote to resolve, but now here was a single star "surrounded with a faintly luminous atmosphere." He concluded: "Our judgement I may venture to say, will be, that the nebulosity about the star is not of a starry nature."
It has since been conjectured that the nebula in fact envelops a tightly orbiting binary star with a period of up to 10 days. Gas is presumably expanding away from the larger stellar component. [Source: Wikipedia]

North is to the right (I think), and this is a slight crop due to the various movement of different subs.

COMMENTS:
This is my first run at NGC1514. The nebula is located in the southern portion of the sky. As usual I was working in between clouds and the moon.
One of the gents on the Italian Astronomical Forum, Roberto Marinoni, posted his excellent version in early January and I decided to give it a try. It came out pretty good, although the big stars are washed out. I had hoped to take some short subs to bring life back into those stars, but ran out of time. 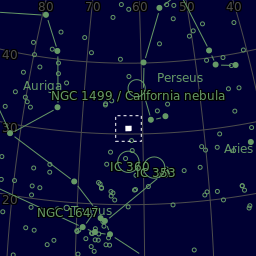