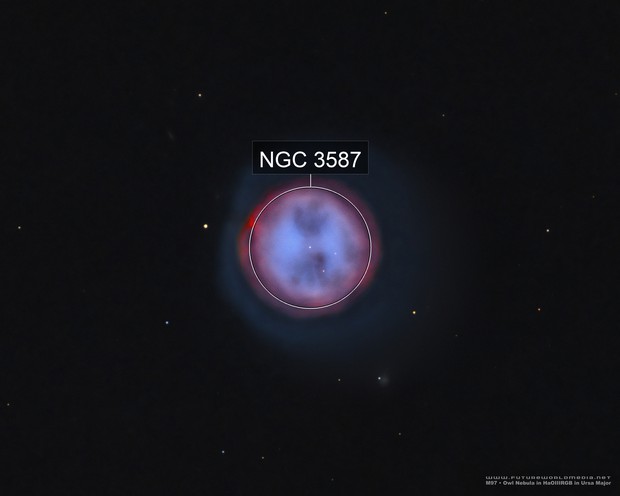 This proved to be a very challenging object to process. Not only did I want to capture the OIII being ejected out, but also the details of the core. I combined 12 hours of data in Ha and OIII from 2019 with data I just captured in 2020 in HaOIIIRGB. RGB was only captured for the stars.

The Owl Nebula (also known as Messier 97, M97 or NGC 3587) is a planetary nebula located approximately 2,030 light years away in the constellation Ursa Major. It was discovered by French astronomer Pierre Méchain on February 16, 1781. When William Parsons, 3rd Earl of Rosse, observed the nebula in 1848, his hand-drawn illustration resembled an owl's head. It has been known as the Owl Nebula ever since.

The nebula holds about 0.13 solar masses of matter, including hydrogen, helium, nitrogen, oxygen, and sulfur; all with a density of less than 100 particles per cubic centimeter. Its outer radius is around 0.91 ly (0.28 pc) and it is expanding with velocities in the range of 27–39 km/s into the surrounding interstellar medium.

The 14th magnitude central star has since reached the turning point of its evolution where it condenses to form a white dwarf. It has 55–60% of the Sun's mass, 41–148 times the brightness of the Sun, and an effective temperature of 123,000 K. The star has been successfully resolved by the Spitzer Space Telescope as a point source that does not show the infrared excess characteristic of a circumstellar disk. 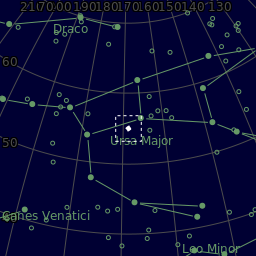