From Wikipedia, the free encyclopedia:

Kappa Draconis, Latinized from κ Draconis, is a blue giant star located in the northern circumpolar constellation of Draco. At an apparent magnitude of 3.88, it is barely visible to the naked eye when artificial lighting from cities is present. Nevertheless, it is a powerful star, approximately five time as massive as the Sun. It is about 490 light-years away, and is 1,400 times brighter than the Sun.

Kappa is thought to be just entering its red giant phase, having exhausted the supply of hydrogen in its core. Over the next several thousand years, the star will expand, becoming more powerful but with a much cooler surface temperature. Tens of thousands of years from now, Kappa Draconis will appear much brighter, probably shining with a reddish hue.[citation needed]

The star is currently located at declination 69° 47' 18" North (RA 12h 33m 29.0s), but due to the effects of precession, Kappa Draconis was the nearest star to the North Celestial Pole visible to the naked eye from 1793 BC to approximately 1000 BC, though it was 6° removed from perfect alignment, making it only an approximate pole star, similar to the roughly 7° variance from perfect alignment of the much brighter (magnitude 2.08) star Kochab, at the same time during Earth's precession 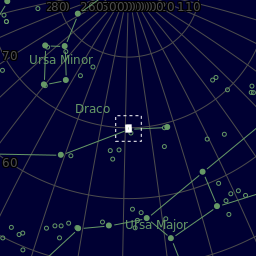