EGB 4 (a nebula discovered by Ellis, Grayson, & Bond in 1984) is NOT a comet, despite it's comet-like appearance. It is an emission nebula surrounding a catacylismic binary star system called BZ Cam in the constellation of Camelopardis.

It has an unusual bow-shock structure as BZ Cam (with it's associated wind) moves through the interstellar medium, similar to the bow wave in front of a ship that is moving through water.

BZ Cam is believed to be a white dwarf star that is accreting mass from an accompanying main-sequence star of 0.3-0.4 solar masses.
It is around 2,500 light years away, and has a space velocity of 125 km/second.

I can only find one previous image of EGB 4 online, a NASA APOD from 2000, so I believe this could be the first amateur image and the first colour image. 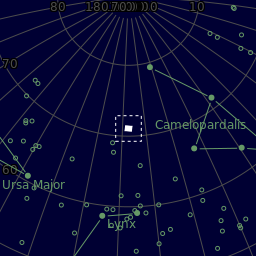