Comet NEOWISE aka C/2020 F3 (NEOWISE) was named after the mission that discovered it using the Wide-field Infrared Survey Telescope (WISE). Initially identified on March 27, 2020 when it was an eighteenth magnitude object, it started getting brighter and brighter as its long period approached the sun, eventually reaching a peak of magnitude 0.5. This is the brightest comet observed in the Northern Hemisphere since Hale-Bopp in 1997.

I had earlier observed the comet with my naked eye a couple of times, once when it was closest to the sun on July 3. But the early morning of July 12 was when everything cooperated in terms of seeing/transparency/clouds and it was the brightest comet of any I've ever observed with my unaided eye. It was also my daughter Maya's first comet observation.

The first time I had a chance to image comet NEOWISE was on July 24, 2020 when it was around magnitude five just a day after its closest approach to Earth. The issues I was having were numerous: I was using my normal high end mount for a long imaging session of the Heart Nebula IC1805 (again!) and I didn't want to move it or change its synchronisation. There were low level clouds and this comet hugged the horizon whether you saw it in the morning facing Northeast or at night facing Northwest. I had also moved my cameras around and had forgotten the spacing required to obtain the roundest stars with my QHY247C which I didn't have time to debug.

I finally dragged out my original Celestron AVX mount and moved it an optimal viewing location, mounted my FC100DF and SV70T scopes on it, and managed to grab some frames using two cameras. At first I was excited to go back to my old mount, doing something different, but then it was such a pain to use that I realised what a difference the MyT makes! In any event, I was committed now. I initially started with my FC100DF and used my Baader VariLock T-thread extender to adjust the spacing between the QHY247C and the reducer to get the stars as round as possible and grabbed several frames at 1s, 2s, and 15s. Then since I knew my SV70T was set up more correctly with the QHY163 (this combination is what I was using on a nightly basis to image the Heart), I decided to use that to capture several frames using just a luminance filter. Since the Ha, O3, and S2 filters were present in the filter wheel, I imaged several more frames to highlight whatever was being captured based on the bandpasses of these filters at 4s, 15s, and 30s. I would argue this is a fairly unique combination and in addition to seeing where these elements (or other substances that overlap these bandpasses) are highlighted, I wanted to get some colour into my mono images in case my OSC images didn't work out. I then prepared all the necessary darks, calibrated, registered, comet and star aligned, and integrated these frames separately and in combination using PixInsight.

In terms of processing, I first created a luminance (L) master of only the comet that included all frames, including the narrowband data (I experimented with creating both a L-only master and a complete master). I then created separate OSC, Ha, O3, S2, R, G, and B comet masters (in part because I wanted to see/show the data separately). Since a comet moves much faster than the stars in the sky, and this was my first time processing comet data, I had a hard time with removing the star trails and getting clean comet only and stars only images: only the main LRGBSHO image (A) is the one where I carefully clone stamped out the star trails; in all other cases, I didn't bother since I should've done this earlier in the process. The solution that worked for me was to create a starless image of the star master created from aligning on the stars (as opposed to aligning on the comet, which are supposed to be done separately and combined but that didn't work for me; I even tried a star mask based approach to add in the stars but again, no luck) and then subtracting it from the parent image, leaving me with only the stars and without any comet signal. Armed with L and RGB stars only masters, I then used the SHO-AIP script to figure out which combinations looked the most aesthetically pleasing.

Overall, given the timing, the time spent on capturing (less than an hour), the rush in which it was done, and the older AVX equipment, I thought it turned out okay. I rarely see people taking narrowband data of comets, so I thought that was interesting. You can see both tails in the narrowband only image (B) are mostly green indicating hydrogen signal but the comet head is purple indicating a combination of sulphur and oxygen and the gases right behind are cyan indicating some combination of hydrogen and oxygen. The LRGB image (C) on the other hand shows the typical green halo of comets that's due to the presence of carbon. There's some internal structure to the body (i.e., the actual ball of rock and ice is clearly distinguishable). Finally the different sets of images combine to make one that is clearly brighter/better in my opinion even though I have a soft spot for the narrowband only image. That said, having processed my very first comet, I do wish I had spent more time capturing additional data.

I started my astronomy hobby in all seriousness after seeing Halley's comet in 1986, a time when I could barely tell the difference from a comet or a random star, even with my small 3" telescope. Fortunately I had much older people than me who were able to work magic with this scope and what I saw was pretty decent, especially compared to what I saw in a 16" homemade reflector (the construction of which was completely done by hand, from the cutting of the wood to build the tube, to the grinding and polishing of the mirrors; I never did this myself but I went to every class and watched a bunch of people do it and saw a bigger and more refined operation of the same process, i.e., a three metre mirror being automatically polished going by memory). So working with this comet was a fun trip down memory line and while these pictures are not as great as they could be due to the timing, I can't wait 6,800 years to see and image it again!

Description: This includes only the LSHO data.

Description: This is only the LRGB (OSC) data.

Description: This is only the luminance data.

Description: All captures from all filters side by side. 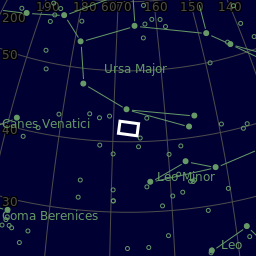