This was taken in my back yard (Bortle 8/9) over the course of a couple weeks. A very challenging target because the signal is very dim and the object is low in the sky so I could only get a few hours a night on it.

This was also the first target with my new WO FLT 132, new mount (iOptron CEM 70), new focuser, new guide scope, and new filters. So a spent a good bit of time trying to get things dialed in.

Sh2-308, also designated as Sharpless 308, RCW 11, or LBN 1052,[1] is an H II region located near the center of the constellation Canis Major, composed of ionised hydrogen.[2] It is about 8 degrees south of Sirius, the brightest star in the night sky. The nebula is bubble-like (hence its common name, the Cosmic Bubble), surrounding a Wolf–Rayet star named EZ Canis Majoris. This star is in the brief, pre-supernova phase of its stellar evolution. The nebula is about 4,530 light-years (1,389 parsecs) away from Earth,[3] but some sources indicate that both the star and the nebula are up to 5,870 ly (1,800 pc) away.[4][5] Yet others indicate the nebula is as close as 1,875 ly (575 pc) from Earth.[6]

The nebula was formed about 70,000 years ago by the star EZ Canis Majoris throwing off its outer hydrogen layers, revealing inner layers of heavier elements.[2] Fast stellar winds, blowing at 1,700 km/s (3.8 million mph) from this star, create the bubble-shaped nebula as they sweep up slower moving material from an earlier phase of the star's evolution. The hydrogen composing the nebula is ionised by intense ultraviolet radiation.[9] The nebula is approximately 60 light-years across at its widest point.[10] 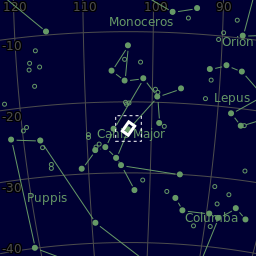