This object is a face-on lenticular galaxy located 54 million light years away in the constellation of Ursa Major at a declination of +51 degrees. This magnitude 11 galaxy is the 171st brightest galaxy in the sky. It spans 3 arc-minutes in our apparent view and has a diameter of 50,000 light years.

The color of this galaxy disk is unusual. I calibrated the colors twice in Pixinsight in an attempt to represent the color as realistically as possible. It is unusual in that the inner region is a reddish color, while the mid-region has an aqua blue tint. The color transitions to blue for the outer disk.

The structure of the disk is also interesting. As described in the 1999 paper “Triple Bars and Complex Central Structures in Disk Galaxies”, by Erwin and Sparke, this galaxy has a triple set of bars as identified by detailed analyses of the Hubble image. The 3 bars are harder to see in my image. The largest, and easiest to see, bar extends across most of the disk, from 11 o’clock down to 5 o’clock. The intermediate bar, across the mid-disk region, is probably hardest to see, extending across from 10 o’clock to 4 o’clock. The third small oval bar is in the bright inner core region, extending vertically across the whitish core.

I actually see a fourth bar – slightly smaller than the largest bar and perpendicular to it. But perhaps I have just been staring at this one too long.

There is a potential companion in the upper right corner of the image, galaxy MCG+09-15-039, which is a similar distance away. 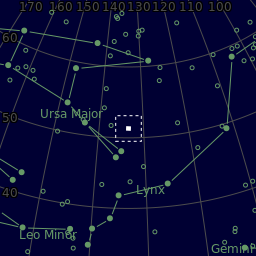