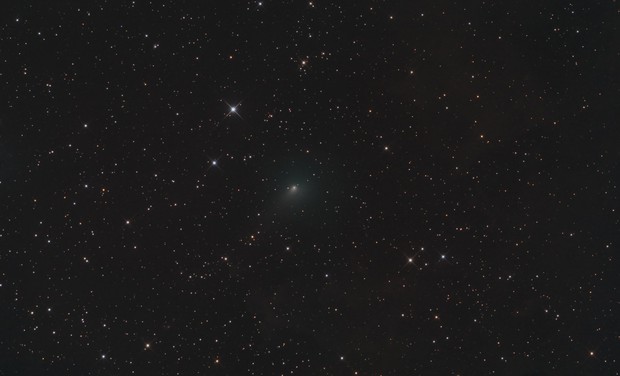 Comet C/2014 S2 unexpectedly brightened in late September 2015 to 10th magnitude. This image was captured in a 2 hour dark sky window between the end of twilight and moon rise on 2nd October 2015.

The comet has developed a noticeable green coma from sun light trapped and fluoresced by acetylene di-radicals formed in the coma gasses surrounding the comet nucleus. It also sports a short dust tail.

Stacking was done in deep Sky Stacker (using the time stamp position interpolation method for comet alignment). Digital Development Processing in Images Plus and filtering and image treatment in Photoshop.

The stars only image was processed using an adaptation of the Hubl method. The adaption was required to preserved the faint IFN. The calibrated RAW star aligned images were stacked using kappa sigma (sigma 1.15, 10 iterations) image combination. The result image was duplicated into S and T. T is processed using the Hubl method - first treat T with the GradientXterminator filter (Russel Croman plugin) to reduce the comet artefact as much as possible then further duplicate image T into A & B then B has applied the following filters - Dust & Scratches filter [radius 15, threshold 6], Gaussian blur [radius 10] and then subtract B from A with an offset equal to the mean sky background of A to create image T' - now containing just background sky. A deep feathered selection from T' carefully extracting the area containing the residual comet artefact is placed over image S - this is now the stars-only image with preserved IFN and this is further processed to reduce high frequency noise and improve star colour to give final stars-only image S'.

The comet only image is created by median stacking all the calibrated RAW images aligned on comet found in the same reference frame used for star alignment to create image C (this contains the isolated comet and a lot of star residual artefacts). C is duplicated to create images C & D. D then uses a large radius clone stamp tool (radius slightly larger than the comet coma) to carefully stamp out the comet to leave only background. D is then Gaussian blurred (radius 10) and subtracted from C with an offset of 0 to give C' - a very dark image containing only the comet.

C' (processed comet-only) is then layered over S' (processed stars-only) using screen blending. Finally the black point is set. The use of the same reference frame in the S and C images ensures that the processed images S' and C' are correctly aligned in the screen blending step.

Version B: Lowered the black point to make the very faint IFN a little more visible. There was a lot of dead space at the black end of the histogram due to the screen blending mix of the comet only and star only images. 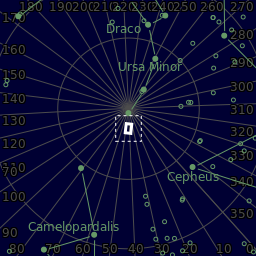