Edit: I've marked the location of Cygnus X-1. It is a strong X-ray source identified in 1962 as a binary star system, with the black hole orbiting the star HDE 226868.

I think this my first Sharpless nebula. It was fairly easy to process, although it would've benefited from longer exposures and ofc Ha.

wiki: Sharpless 101 (Sh2-101) is a H II region[1] emission nebula located in the constellation Cygnus. It is sometimes also called the Tulip Nebula because it appears to resemble the outline of a tulip when imaged photographically. It was catalogued by astronomer Stewart Sharpless in his 1959 catalog of nebulae. It lies at a distance of about 6,000 light-years (5.7×1016 km; 3.5×1016 mi) from Earth.

Sh2-101, at least in the field seen from earth, is in close proximity to microquasar Cygnus X-1, site of one of the first suspected black holes. Cygnus X-1 is the brighter of the two stars (lower star) in close vertical proximity just to the right of Sh2-101 in the image presented here.[2] 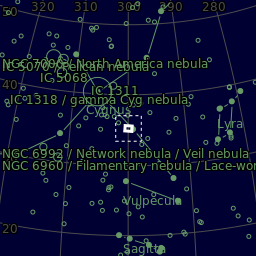