The Triangulum Galaxy (also known as M33) that is about 3 million light-years away from Earth.

Under exceptionally good viewing conditions with no light pollution, the Triangulum Galaxy can be seen with the naked eye. It is one of the most distant permanent objects that can be viewed without the aid of a telescope.
Being a diffuse object, its visibility is strongly affected by small amounts of light pollution. It ranges from easily visible by direct vision in dark skies to a difficult averted vision object in rural or suburban skies.

With a diameter of about 60,000 light-years, the Triangulum galaxy is the third largest member of the Local Group of galaxies. It may be a gravitationally bound companion of the Andromeda Galaxy

The Triangulum galaxy may be home to 40 billion stars, compared to 400 billion for the Milky Way, and 1 trillion stars for Andromeda Galaxy.

As mentioned above, M33 is linked to M31 by several streams of neutral hydrogen and stars, which suggests that a past interaction between these two galaxies took place from 2 to 8 billion years ago, and a more violent encounter will occur 2.5 billion years in the future.

Studying M33 in infrared light, NASA's Wide-field Infrared Survey Explorer (WISE) revealed hotspots of activity within the galaxy in 2011 while also showing that the center of the galaxy doesn't have much going on within it. 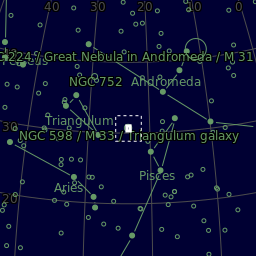