Charles Messier was a 18th century comet hunter, Messier created his catalogue of objects to identify things in the night sky that were not comets. I think he might appreciate the juxtaposition here :) .

This 4 frame mosaic shows comet 41P Tuttle-Giacobini-Kresak on the night of 21st March 2017.

The image was created from 3 different imaging sessions:

2. 23rd March 2017 - TV85/Reducer used to image a wider background in 4 overlapping frames using 12 x 10 minute unguided exposures in each framing to go deeper and fill up the rather sparse star field and capture M97, M108 and beta ursae majoris (Merak) with space around them. Approx 8 hours of the integration.

A 4th session repeating the mosaic with 4 x 15 x 1 minute exposures and a diffusion filter (1 hour total) to capture star colour was not used due to mosaic construction and overlay complexity (need to rethink how to do this). Used software tactics to extract star colour instead.

The 4 backgrounds regions where individually calibrated, aligned and stacked. Sky gradients were removed and matching background levels set before using AutoPano Pro to build the final background mosaic. The comet and M97 and M108 were composited and blended into the mosaic using uncalibrated guide frames from the pre-stacked image set 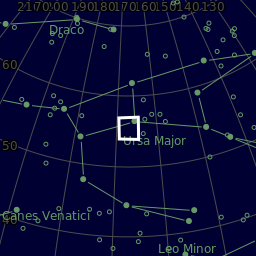