M31N 2008-12a is a remarkable recurrent nova within the Andromeda Galaxy.

I searched the internet for images of this Nova but just found a yellowish image with low definition. So, I suppose this image is unique. It was then that I decided to try alternative processing.

With eleven eruptions now identified, including eight in the past eight years, the system exhibits a recurrence period of one year, and possibly just six months.

This short inter eruption period is driven by the combination of a high mass white dwarf (1.38 MSun) and high mass accretion rate. Such a high accretion rate appears to be provided by the stellar wind of a red giant companion.

Deep Hα observations have revealed the presence of a vastly extended nebula around the system, which could be the ‘super-remnant’ of many thousands of past eruptions.

With a prediction of the white dwarf reaching the Chandrasekhar mass soon, M31N 2008-12a has become the leading pre-explosion type Ia supernova candidate. 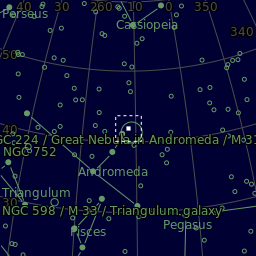