My obs is finally back in operation after a 2 month down time.

This is my first image with a new mount, an MEII with absolute encoders. This one, and I expect all future images will be unguided and no plate solve centering. the MEII has been performing flawlessly. Imaging is so much easier without having to do guiding. This does look like more mount than needed for the TV127 scope currently on it, but I am shortly adding an OOUK AG12" f3.8 imaging Newtonian.

M44 here under a full moon and unguided.

The Beehive Cluster (also known as Praesepe (Latin for "manger"

, M44, is an open cluster in the constellation Cancer. It is one of the nearest open clusters to Earth, containing a larger population of stars than other nearby bright open clusters. Under dark skies, the Beehive Cluster looks like a small nebulous object to the naked eye; as known since ancient times. Classical astronomer Ptolemy described it as "nebulous mass in the breast of Cancer," and it was among the first objects that Galileo studied with his telescope.

Age and proper motion coincide with those of the Hyades, suggesting they may share similar origins. Both clusters also contain red giants and white dwarfs, which represent later stages of stellar evolution, along with many main sequence stars.

Distance to M44 is often cited to be between 520 and 610 light years. There is better age estimates of around 600 million years old, equivalent to about 625 million years for the Hyades. The bright inner cluster core's diameter is about 23 light years.

Observationally, the Beehive is easily visible to the naked-eye as a small nebulous cloud when Cancer culminates in the early evening each year from February to May. At 1.5° across, the cluster easily fits within the field of view of binoculars or low powered small telescopes.

In 1609, Galileo first telescopically observed the Beehive and was able to resolve it into 40 stars. Charles Messier added it to his famous catalog in 1769 after precisely measuring its position in the sky. Along with the Orion Nebula and the Pleiades cluster, Messier's inclusion of the Beehive has been noted as curious, as most of Messier's objects were much fainter and more easily confused with comets. Another possibility is that Messier simply wanted to have a larger catalog than his scientific rival Lacaille, whose 1755 catalog contained 42 objects, and so he added some bright, well-known objects to boost his list.

Ancient Greeks and Romans saw this object as a manger from which two donkeys, the adjacent stars Asellus Borealis and Asellus Australis, are eating; these are the donkeys that Dionysos and Silenus rode into battle against the Titans.

Hipparchus (c.130 BC) refers to the cluster as Nephelion ("Little Cloud"

in his star catalog. Claudius Ptolemy's Almagest includes the Beehive Cluster as one of seven "nebulae" (four of which are real), describing it as "The Nebulous Mass in the Breast (of Cancer)". Aratus (c.260-270 BC) calls the cluster Achlus or "Little Mist" in his poem Phainomaina.

This perceived nebulous object is in the Ghost (Gui Xiu), the 23rd lunar mansion of ancient Chinese astrology. Ancient Chinese skywatchers saw this as a ghost or demon riding in a carriage and likened its appearance to a "cloud of pollen blown from willow catkins." It was also known by the somewhat less romantic name of Jishi qi, the "Exhalation of Piled-up Corpses". It is also known simply as Jishi, "cumulative corpses." 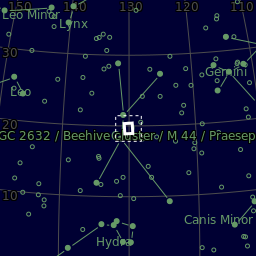