Remington's Galaxy - Discovery of a new LSB Galaxy near NGC2655

Remington's Galaxy - Discovery of a new LSB Galaxy near NGC2655

It has been quite a journey on this image, and I'm very excited to post it, finally!

The short story: I discovered a new low-surface-brightness galaxy near NGC2655, and in collaboration with local imaging friend Dan Crowson, have authored a short article that is now published in the Research Notes of the American Astronomical Society (RNAAS).

The article can be accessed via DOI here.

The post on my personal site can be found here.

I completed this deep LRGB image of the NGC2655 group in March 2017. After completion, I noticed a faint smudge to the northwest of NGC2655, originally thinking it was an optical aberration. Dan Crowson took a closer look with me, and he graciously pulled down data from his observatory at Deep Sky New Mexico. With a hard stretch, we again revealed the object and were onto something.

We searched NED and every VizieR database with Aladin. No galactic database identified the object, and we were unable to identify additional data beyond a few Guide Star Catalog annotations with magnitude data in the Bj band. We got confirmation from a few academic/professional astronomers that this was indeed new with a strong inkling that it was a low-surface-brightness dwarf galaxy.

Those who responded to my inquiries were excited for this discovery, as LSB galaxies are a budding area of research. Being composed of >95% dark matter, they serve as excellent dark matter "petri dishes". The remaining <5% of their mass is stellar and accounts for the very little surface brightness they have. By definition, LSB galaxies show within only 1 magnitude of the ambient sky brightness. They are both very interesting and mysterious!

After 12+ months researching and cold-calling astronomers across the globe, we were at last directed to the RNAAS as a possible outlet to detail the discovery. I wrote up our analysis and confirmation information, and our paper was accepted on April 19 2018. From first data acquisition to publishing, 549 days elapsed - all worth the effort!

Many asked on other forums what I named this galaxy. While my hope is that it gets picked up in larger research efforts and cataloged with an appropriate ID, I will always call it "Remington's Galaxy" after my son, who was born June 29, 2017 in the midst of this effort. 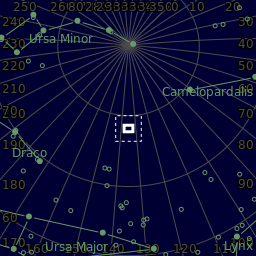