Messier 49 (also known as M 49 or NGC 4472) is an elliptical galaxy located about 56 million light-years away in the equatorial constellation of Virgo. This galaxy was discovered by French astronomer Charles Messier on February 19, 1771.

As an elliptical galaxy, Messier 49 has the physical form of a radio galaxy, but it only has the radio emission of a normal galaxy. From the detected radio emission, the core region has roughly 1053 erg (1046 J or 1022 YJ) of synchrotron energy. The nucleus of this galaxy is emitting X-rays, suggesting the likely presence of a supermassive black hole with an estimated mass of 5.65 × 108 solar masses, or 565 million times the mass of the Sun. X-ray emissions shows a structure to the north of Messier 49 that resembles a bow shock. To the southwest of the core, the luminous outline of the galaxy can be traced out to a distance of 260 kpc. The only supernova event observed within this galaxy is SN 1969Q, discovered in June 1969.

This galaxy has a large collection of globular clusters, estimated at about 5,900. However, this count is far exceeded by the 13,450 globular clusters orbiting the supergiant elliptical galaxy Messier 87. On average, the globular clusters of M 49 are about 10 billion years old. Between 2000 and 2009, strong evidence for a stellar mass black hole was discovered in an M 49 cluster. A second candidate was announced in 2011.

Messier 49 was the first member of the Virgo Cluster of galaxies to be discovered. It is the most luminous member of that cluster and more luminous than any galaxy closer to the Earth. This galaxy forms part of the smaller Virgo B subcluster located 4.5° away from the dynamic center of the Virgo Cluster, centered on Messier 87. Messier 49 is gravitationally interacting with the dwarf irregular galaxy UGC 7636. The dwarf shows a trail of debris spanning roughly 1 × 5 arcminutes, which corresponds to a physical dimension of 6 × 30 kpc.

This is image #35 in long term project to photograph the complete Messier catalog. Turn out ok I think, expected a bit more colour but likely processing issue which I check on. Cool field! 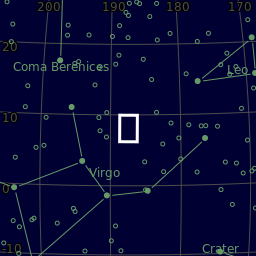