I was curious to see if I could image this famous Hubble field...

This was later imaged in more detail to conclude the Frontier Fields program...

The last of the Frontier Fields – Abell 370

If it weren't for the notiecable red shift, one might mistake this very distant Galaxy Cluster for a much closer Star Cluster.

"Abell 370 is a galaxy cluster located approximately 5 billion light-years away from Earth in the constellation Cetus. Its core is made up of several hundred galaxies. It was catalogued by George Abell, and is the most distant of the clusters he catalogued.

Abell 370 is one of the very first galaxy clusters in which astronomers observed the phenomenon of gravitational lensing, the warping of spacetime by the cluster’s gravitational field that distorts the light from galaxies lying far behind it.

In 2009, study in the field of Abell 370 revealed a grouping of background galaxies lensed and distorted by the cluster into a 30" long arc with the appearance of a dragon, hence nicknamed "The Dragon" by NASA scientists. Its head is composed of a spiral galaxy, with another image of the spiral composing the tail. Several other images form the body of the dragon, all overlapping. These galaxies all lie approximately 5 billion light years away."

Description: Raised the background a bit. 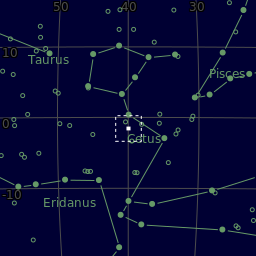