Comments: I took this image from an observatory I shared with famed narrowband imager John Gleason, in 2008.

Known pre-historically on the Southern hemisphere. Mentioned 964 A.D. by Al Sufi. Probably mentioned by Amerigo Vespucci in 1503-4. Discovered by Magellan 1519.

The Large Magellanic Cloud, together with its apparent neighbor and relative, the Small Magellanic Cloud, are conspicuous objects in the southern hemisphere, looking like separated pieces of the Milky Way for the naked eye. They were certainly known since the earliest times by the ancient southerners, but these people produced little documents which are still preserved. The first preserved mention of the Large Magellanic Cloud was by Persian astronomer Al Sufi, who in 964 A.D., in his Book of Fixed Stars calls it Al Bakr, the White Ox, of the southern Arabs, and points out that while invisible from Northern Arabia and Baghdad, this object is visible from the Strait of Babd al Mandab, at 12deg 15' Northern latitude. Next, it was probably mentioned by Amerigo Vespucci in a letter written during his third voyage about 1503-4, as one of "three Canopes, two bright and one obscure;" Amerigo's bright "Canopes" are thought to be the Magellanic Clouds, while the obscure one is probably the Coalsack dark nebula. Eventually, it was Magellan and his discovery expedition who brought them to our knowledge in 1519.

Both Magellanic Clouds are irregular dwarf galaxies orbiting our Milky Way galaxy, and thus are members of our Local Group of galaxies. The Large Magellanic Cloud, at its distance of 179,000 light years, was longly considered the nearest external galaxy, until in 1994, the Sagittarius Dwarf Elliptical Galaxy was discovered at only about 80,000 light years. (Our current distance value takes into account the corrected Cepheid distance scale based on the Hipparcos satellite data published in early 1997.) 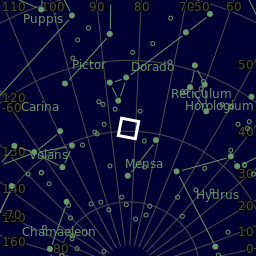