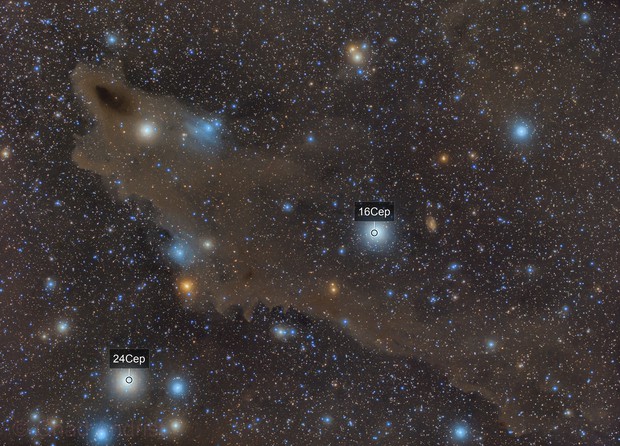 This is my first attempt at capturing a dark nebula, and the Shark or Howling Wolf as it is sometimes called became my target of choice because of it's beautiful variation of colored stars and it's uncanny resemblance to a hungry shark. I knew I needed dark skies to pick this one up, but in SE Wisconsin, truly dark skies are hard to find. It wasn't possible for me to drive 2-4 hours to more pristine skies outstate, so I opted for the best skies I could find within an hour's drive, which was at Harrington Beach State Park near Belgium, WI.

The Shark Nebula or Lynds Dark Nebula 1235 as it's categorized, was positioned in the darkest part of the sky toward the northeast for most of the night, so it made collecting cleaner data more likely. There was one really BAD thing going for me though, the thickening smoke passing overhead originating from the California and Canadian wildfires. Transparency was definitely sub-optimal, but clear, moonless skies that fall on a weekend have been rarer than hen's teeth this summer, so I chased the great white regardless. The smoke thickened at the weekend's passing and now clouds have moved in for the beginning of the lunar cycle, which put a cap on my integration at just 8.49 hours.

Sporting an uncanny resemblance to a shark, LDN 1235, also known as the Shark Nebula, is a molecular cloud in the Cepheus constellation. It is likely an extended red emission (ERE) nebula. The light coming from this nebula is produced by it’s dust particles being hit by high energy UV radiation. This process is called photoluminescence. Within LDN 1235’s border there are two reflection nebulae: vdB149 & vdB150 (van den Bergh catalog). The reflection Nebulae are respectively illuminated by the stars BD+72 1018 and HD 210806, both of spectral type B8IV. These stars give the surrounding gas and dust it’s markedly bluish color. In the field two small galaxies are also visible, PGC67671 and PGC67347. They appear yellowish because their light, crossing the gas and dust along the line of sight, loses part of its spectrum. 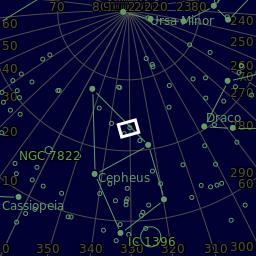