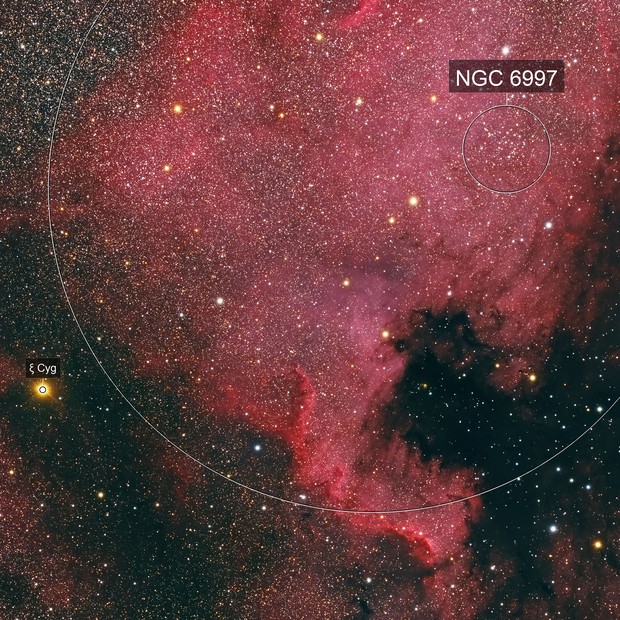 First light for my new ZWO ASI128MC Pro full frame color CMOS camera. It is mounted on an NP127is piggybacked on a OOUK AG12" Newtonian. I am also posting the same target taken simultaneously with the AG12 + ASI 1600MM, which shows the Cygnus Wall in more detail. This one I had to crop somewhat to get the composition I wanted.

The North America Nebula is large, covering an area of more than four times the size of the full moon; but its surface brightness is low, so normally it cannot be seen with the unaided eye. Binoculars and telescopes with large fields of view (approximately 3°) will show it as a foggy patch of light under sufficiently dark skies. However, using a UHC filter, which filters out some unwanted wavelengths of light, it can be seen without magnification under dark skies. Its prominent shape and especially its reddish color (from the hydrogen Hα emission line) show up only in photographs of the area.

The portion of the nebula resembling Mexico and Central America is known as the Cygnus Wall. This region exhibits the most concentrated star formation.

The North America Nebula and the nearby Pelican Nebula (IC 5070) are parts of the same interstellar cloud of ionized hydrogen (H II region). Between the Earth and the nebula complex lies a band of interstellar dust that absorbs the light of stars and nebulae behind it, and thereby determines the shape as we see it. The distance of the nebula complex is not precisely known, nor is the star responsible for ionizing the hydrogen so that it emits light. If the star inducing the ionization is Deneb, as some sources say, the nebula complex would be about 1,800 light-years' distance, and its absolute size (6° apparent diameter on the sky) would be 100 light-years.

The nebula was discovered by William Herschel, from Slough, England, on October 24, 1786 or by his son John Herschel before 1833. (Wikipedia) 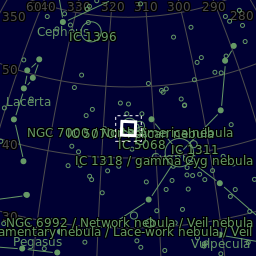