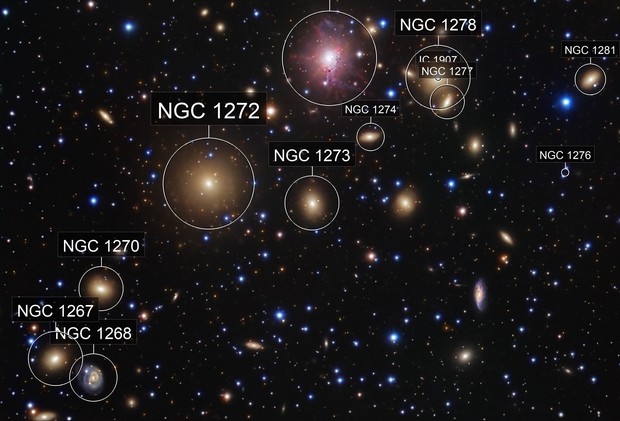 This is a section of the galaxy cluster Abell 426 in Perseus. It is about 250 million light-years away. The galaxy at the top of the picture is NGC 1275. While this object has an oval shape, we are actually looking at a spiral galaxy nearly edge-on as it emits gaseous filaments in multiple directions. NGC 1275 is also known as Perseus A and is a strong source of radio waves as well as X-rays from a black hole at its nucleus.

A 2003 study suggests that NGC 1275 may be generating sound waves at a period of 9.6 million years. [https://academic.oup.com/mnras/article/344/3/L43/1015198] Wikipedia states that “no human will actually hear the note, because its time period between oscillations is 9.6 million years, which is 57 octaves below the keys in the middle of a piano.” [https://en.wikipedia.org/wiki/Perseus_Cluster] Rumor has it that the famed singer Pavarotti suffered two hernias during his career trying to reach a bass note this low.

I collected about 26 hours (170 x 10 min) of luminance data for this image, but ended up using only 5.8 hours. The majority of imaging time was during the recent polar vortex and:

2. winds were strong and gusty

3. my wood stove was roaring and the cluster spent too much time in and around the chimney plume

4. somehow my polar alignment got out of whack and I was too cold and lazy to correct it. I needed to take 1 second guiding exposures to keep the field from drifting so I was definitely chasing the seeing

5. I left my camera at its -25C set point and the nights typically got much colder, so I lost my regulated cooling

I don’t usually like to whine about my imaging sessions, but I know everyone here can relate to this. I collected my color data during the worst periods and although the raw files look awful, I was able to salvage color information. After the Perseus Cluster set into the chimney, I slewed the scope to begin imaging M82. That will be my next saga.

Hope you enjoy the image. 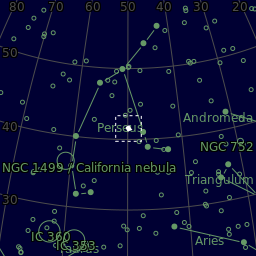