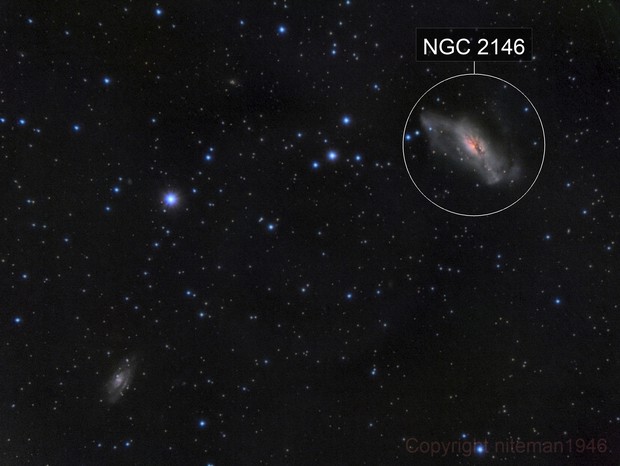 NGC 2146 (upper right) is a barred spiral galaxy type SB in the constellation Camelopardalis. The galaxy was discovered in 1876 by Friedrich August Theodor Winnecke.

It has a diameter of 80,000 lyr. The galaxy's most conspicuous feature is the dusty lanes of a spiral arm lying across the core of the galaxy as seen from Earth, the arm having been bent 45 degrees by a close encounter with a smaller galaxy possibly NGC 2146a (lower left) about 0.8 billion years ago. This close encounter is credited with the relatively high rates of star formation that qualify NGC 2146 as a starburst galaxy. [Source: Wikipedia]

Processing was done with PixInsight, following (for the most part) kayronjm's tutorial of Feb. 24th, 2013. Background was a problem, but detail and color came out OK (see below). North is up and this is a slight crop due to the misalignment accumulation from the different filters and times.

COMMENTS:
I'm afraid this image just barely met even my low standards. There is a noticeable circular refection in the image's center caused by the central obstruction of the scope, when coupled with the Lum filter and when pointing towards the north (over Burleson), and when there are sketchy skies.

BORING STUFF:
I used a technique of capturing the background by subtracting the stars from the finished product. Then cloned out the two galaxies along with the most prominent star. Then did a couple of blurs. Arguably, all that was left in this image was an ugly background and that aggravating central obstruction feature. Twenty-five (25) percent of this was then subtracted from the initial finished product using Pixel Math. It did an OK job of removing (most of) the central feature. 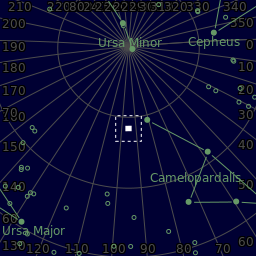