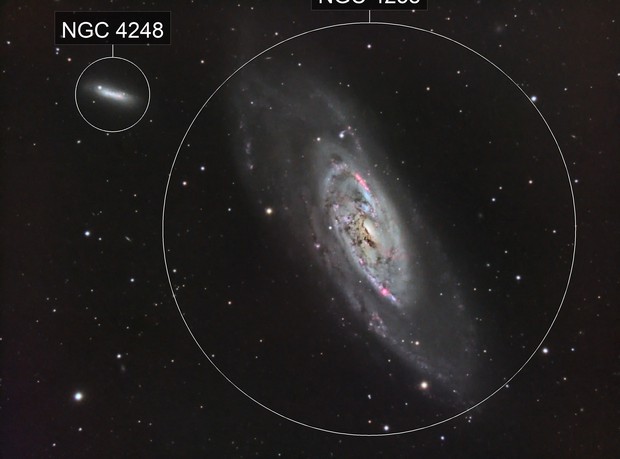 Messier 106 (also known as NGC 4258) is an intermediate spiral galaxy in the constellation Canes Venatici. It was discovered by Pierre Méchain in 1781. M106 is at a distance of about 22 to 25 million light-years away from Earth. M106 contains an active nucleus classified as a Type 2 Seyfert, and the presence of a central supermassive black hole has been demonstrated from radio-wavelength observations of the rotation of a disk of molecular gas orbiting around the black hole. NGC 4217 (out of view, that’s NGC4248 at upper left) is a possible companion galaxy of Messier 106.

M106 has a water vapor megamaser (the equivalent of a laser operating in microwave instead of visible light and on a galactic scale) seen by the 22-GHz line of ortho-H2O that evidences dense and warm molecular gas. These water vapors give M106 its characteristic purple color. Water masers are useful to observe nuclear accretion disks in active galaxies. The water masers in M106 enabled the first case of a direct measurement of the distance to a galaxy, thereby providing an independent anchor for the cosmic distance ladder. M106 has a slightly warped, thin, almost edge-on Keplerian disc which is on a subparsec scale.

It is one of the largest and brightest nearby galaxies, similar in size and luminosity to the Andromeda Galaxy. The supermassive black hole at the core has a mass of (3.9±0.1)×107 M☉.

M106 has also played an important role in calibrating the cosmic distance ladder. Before, Cepheid variables from other galaxies could not be used to measure distances since they cover ranges of metallicities different from the Milky Way's. M106 contains Cepheid variables similar to both those of the Milky Way and other galaxies'. By measuring the distance of the Cepheids with properties similar to our galaxy, astronomers are able to recalibrate the other Cepheids with different metallicities, a key fundamental step in improving quantification of distances to other galaxies in the universe. [Source: Wikipedia]

CAPTURE Information:
The image was captured with the iOptron CEM120 mount , the venerable Meade 12"LX200 SCT, and my Atik 383L+ m CCD at F7.16 (2182mm FL). Image subs were captured through Astronomik's broadband filters Lum (L), along with R, G and B. Imaging subs were taken at 1x1 bin, -10C, and 10 minute for Luminance; and 5 minutes for R, G and B. Additional Halpha narrow band subs at the same binning and temperature, but at a duration of 20 minutes were captured to enhance color during processing.

Processing was done with PixInsight, following (for the most part) kayronjm's tutorial of Feb. 24th, 2013. I used the newly created Luminance Flats (Twilight Flats developed when working on M63, the previous project). And with the new flats, background was not a problem. North is up and this is a slight crop due to the misalignment accumulation from the different filters and times.

COMMENTS:
I used the technique presented on Harry's Astroshed site for adding the Halpha images to the red images. You can see in the finished product where the isolated Hydrogen Alpha features are prominent in red.
I thought it came out pretty well. 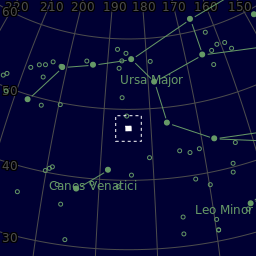