M51 - The Whirlpool Galaxy
It is an interacting grand-design spiral galaxy with a Seyfert 2 active galactic nucleus. It lies in the constellation Canes Venatici, some 31 million light-years away from Earth.

The Whirlpool Galaxy is interacting with a smaller companion, NGC 5195 (Messier 51b), a dwarf galaxy connected to its larger neighbour by a tidal bridge of dust. The bridge is visible in images of the pair silhouetted against the central region of the smaller galaxy.

The tidal interaction with NGC 5195, which was not discovered until the advent of radio astronomy, has considerably enhanced the spiral structure of the Whirlpool Galaxy. Astronomers believe that it is also triggering waves of new star formation. The interaction leads to compression of hydrogen gas which, in turn, leads to formation of stellar nurseries. The two galaxies will eventually merge, but it will take another few passes for the merger to be complete, which will likely take hundreds of millions of years.

Some personal background details:
I was avoiding going back to the newtonian due to the guiding requirements and the bad shape my mount is in. After some hypertuning, I am finally able to get to a guiding close enough to my imaging scale. So here's the first image for 2019 using the newtonian.

I had to drop all my red frames from that night due to some weird diagonal light streaks in both directions. My suspicion is that before the meridian flip, the neighbor's lights were reflecting inside the tube. And only Red was imaged pre flip. Rewind 1 week, I went for my first field AP event and only got 30 minutes of Red and nothing else, which was used instead. 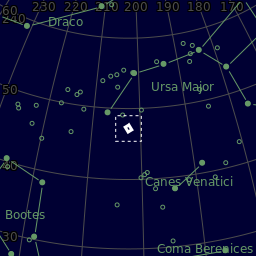